The Tools of the Trade Show...

The Tools of the Trade Show took place today in Pickering, Ontario. This is one of the very few vintage tool shows that happen in Canada, so few in fact, the promoters are able to run it twice a year; a spring show in April and a fall show in October.

In the past two years I have found that the dealers had more tools on their tables than there were potential customers to buy them. This year I felt this ratio was in reverse. I think some of the dealers were gun-shy, so they cut back on their inventories and displayed less. As a sign the economy is possibly turning around, I think the buying numbers swelled this year but faced a lesser number of choices. It is possible that I also overheard more haggling over price this year than I have heard in the recent past. As an example of this, I returned to one dealer to talk price about a plane I saw about 75 minutes previous only to find that the plane gone, along with about 90% of the rest of his inventory. I mentioned that it looked like he did quite well that morning and he answered that he thought his customers made out much better than he did. Signs that displayed, "Prices are negotiable" were commonplace.

Doug Orr, the writer of all things vintage in the Lee Valley Tools' Newsletters, had his booth up and running, crammed full of wood moulding planes (sadly, no H.E. Mitchell's) and other tools of quality. We discussed a beautiful, but unmarked, ¾" steel shoulder plane with what I think was a walnut infill that I picked up off his table. This thing was amazingly built with a price of $155. He told me that it had an $85 blade in it, which barely poked out of the finest mouth I have ever seen on any plane. The mouth was so fine in fact, that I reluctantly put it back on the table. Looking at the mouth of that plane, I knew that with my limited plane abilities at this point, I was looking at buying $155 worth of pure frustration. Maybe one day, when my skills with these things improve, I won't be so quick to put things down that intimidate me, but today wasn't that day.

As with every show, Martin J. Donnelly Tool Auctions was front and centre. Personally, I really appreciate this company being present as it gives this show the vintage tool trades "Stamp of Approval". Too often we Canadians are treated as distant relatives by our American cousin's, and it is good to see we are worthy of Martin making the long drive up here (do you hear that you eBayers that won't ship to Canada). While here, Martin also takes on the job as speaker at the meeting held before the show by The Tool Group of Canada. Maybe there is enough of us up here to convince companies like Jim Bode Tools to share the driving chores with Martin in the fall. 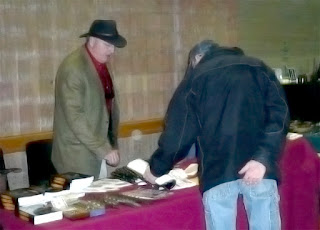 I also got to hold my first Stanley No.1 Bench Plane this morning, which was quite an event, I can assure you. I saw this little plane sitting on a rack in Dave (ToolRush) Carriere's big booth. The bed was unmarked, the lever-cap was smooth with the key-hole mount, the blade had the Victory Stanley logo and the adjustment wheel was the older solid-filled style. I thought it might have been a miniature model of a No.4 or a salesman's sample, so I held it up and asked Dave what it was. When he answered, "Stanley No.1; $1300", it blew me away. I had read a number of articles on this plane and had pretty much decided I would never own one because of its size. Being able to hold an almost perfect example of one in the palm of my hand this morning, I thought to myself, "Yup. Mitchell, you will never own one of these things". Its cute, I'll give it that, but if the only way you can describe something like this is to use the word, "cute", it ain't no tool I want to own. Even though I had confirmed my suspicions about this plane, the whole experience did leave me feeling a little foolish. Some tool collector, eh? I didn't even recognize the infamous Stanley No.1.

As if the Stanley No.1 introduction didn't make me feel foolish enough, I had to add to it at the Sauer & Steiner Toolworks booth. This world renowned plane making firm is also present at every one of the Tools of the Trade shows. Each time I passed them my eye was drawn to a mitre plane they had on display, one that appeared to be about 10" in length by about 2¼" in width. Finally, during the forth go-round I stopped to have a look. I have been thinking for over a year now of making a dedicated shoot board plane, but first I have to finish the actual shooting board. I slapped together a temporary shoot to use while I was still playing with the final one's design and use my Veritas 15" Low-Angle Jack Plane with it. I love this plane but it is just too damned light to use for shooting. What I want is a hernia-inducing slug of metal that won't deflect off the end grain like the Veritas does. When I picked up this Sauer & Steiner, it immediately just felt right for the job. I had been all over this company's website a few times and have read much about their products, which are beautifully built, by the way, so I already had a rough idea what the cost of the plane was, but hoping a miracle had happened and the prices had fallen, I asked. I don't know if it was monsieur Sauer or monsieur Steiner that answered, but whichever it was, the answer was, "About 5". That answer didn't register with the number I had in my head for some reason, and I blurted out, "Hundred?" Either not wanting to embarrass me further, or not wanting to telegraph it throughout the hall, the conveyor of the information mouthed the word, "Thousand", as he smiled and shook his head. The thing is, I was thinking $6k when I walked up to the table, but still ended up walking away red-faced and embarrassed. I can get myself into these predicaments, I tell ya.

So what did I end up carrying home after four hours of frenzy feeding on vintage tool delights?

I arrived at the show looking for three specific items and walked out with one of them. I went in looking for the bullnose attachment for my Stanley No.72 Chamfer, a Stanley No.20 square, something longer than 16", and, of course, any tool stamped "H.E. Mitchell". I left with the square.

Long Stanley No.20 squares are a rarity, indeed. Not only did I find a long one, I found the longest one made. Not only that, I found it at an excellent price. While they rarely show up, the few that I have seen for sale have sold  for anywhere from $95 on eBay for a very poor example, to $165 on a dealers' online store for a good example. I picked up this one for $75 and I think it may clean up quite nicely.

The Tools of the Trade Show may not be near the size and depth of some of the larger American and British versions, but for our little corner of the world, it is a little bit of tool heaven.


While developing a profitable retail business is more difficult in Canada than it is in the United States, we do have more and larger natural spaces for us to go to and lick our wounds after the bailiff has done his job and we have more time on our hands :o)
All values taken from results of Internet searches and may or may not be accurate.
Posted by theparttimewoodworker.blogspot.ca at 22:43