When I first started out seeking information about hand tools and using them, I was astonished with how many blogs and sites there are out there which are dedicated to this topic. There is literally a smorgasbord of information out there for just about every aspect of this hobby.

At first I thought every word on every digital page out there was like the Holy Grail, cast in stone and I could believe every statement. It didn’t take long for my naivety to wear thin and have skepticism take its place.

Lets face it; everyone has their own little hype and their own little sacred cows. If the online hand tool world decided to all write about their favorite smoothing plane tomorrow, it would take a few lifetimes for each of us to do follow-ups on every, “the best that ever was”. I doubt you would find two reports that would agree on the best manufacturer, length, weight, blade angle, tote style, blade hardness, blade thickness, blade edge angle, secondary bevel angle or no secondary bevel at all, adjustment strategy, stroke angle to use, which wax to use to make it slide better and which one to use to make it pretty. Each and every one of us has come up with our own “special” tool, which we all use in our own “special” way. The only thing common to all of us is that we are all very happy and willing to tell everyone else that will listen why our choices and ways are the best, and theirs are wrong.

I still read everything I can find on the subject, but the words, “So you say”, are always present in my mind as I do.

It was this way with shooting boards. I don’t know how long ago it was, but my first encounter with these shop appliances was a few posts Stephen, over on Full Chisel, did on them, discussing what he used them for. This tweaked my interest. Then Rob, over on Woodbloker, wrote a few posts about them discussing how to build one, which turned my interest in them up even more. Finally, browsing through In the Woodshop, I discovered Derek was a firm believer in them. I figured if three guys whose opinions and work I respected where into these things, then there must be something to them.

I studied every pixel in every picture of the three boards that came to be my “standards”. Stephen’s examples are workhorses. Just looking at them (he has a few) tells you it was created to get the job done. Rob has made a few shooting boards over the time I have followed his blog, making them for both friends and for his own use. Like Stephen’s, they are designed for the job at hand, made from “odds n’sods knocking around the ‘shop” and constructed to take a beating. Then I viewed Derek’s entry into the fold. Wow! Made from Jarrah and Tasmanian Oak, it just glowed. Not only beautiful, it included a number of ingenious features for adjustments, as well as a ramped stock platform and Elm adjustment knobs. This set me off on a designing frenzy.

The fact that, to this point, I had never even seen a shooting board in the flesh, let alone used one, didn’t come into the fray. I applied my own form of physics and my own thoughts on design. I considered the flat stock platform, compared to a ramped one and felt the angled one made more sense. With a flat platform, wear on the plane blade is always at the same spot, which would mean having to sharpen it more often. Derek’s example has the stock platform high at the entry end and low at the far end. This, to me, means the plane is pushing the stock up off the base all the time, so I figured reversing that so the blade is always pushing down made more sense. I also thought a ramped base for the stock would make it harder to hold, so I decided mine would have a ramped race for the plane. Like Stephen, I wanted a long one so I could do edge planning, and like Rob, I wanted a “birds house” so I could do flat miters. Because my plan is to build small boxes and such, I also wanted a whole lot more versatility in its use than my three standards offered. I thought my end design had some merit, along with its bird house and ramp, although few others shared my views.

As I still hadn’t used one, I still wasn’t sure about their worth, so building the design wasn’t at the top of my “let’s get er’ done” list. I did get as far as making two attempts to produce a 20” wooden hinge to facilitate some of the adjustments I wanted the board to do; both abysmal failures. As I couldn’t get the pin’s hole straight in either of them, the first completely cracked one flat in my first attempt at opening it and the second wouldn’t open at all. Both examples sit here on my desk and mock me every day, but as they look cool, even though neither works, I refuse to throw them away. Failure to produce a working hinge also turned me off the project a tad.

So last weekend we had a party for my in-law’s sixty-fifth wedding anniversary. It scares me that two people can live with each other for that length of time and come out the other end still talking to each other, but if they can do that, then a celebration in is order. One item I did for them was to make them a rather snazzy poster of the two of them sitting on scattered letters and numerals that spell out “65th anniversary” which we set up on an easel for the all the guests to sign. Not having an easel, my wife borrowed her niece’s, who is a teacher. When it arrived, we discovered it was broken. It was a cheap wooden thing that had a framed tray that held the legs in place, but the tray had just fallen apart over time, so my job was not only to make the poster, but also fix the easel it was to sit on.

I cut the sidepieces for the tray on the same angle as the legs, but not being into the job, I cut them by hand without the assistance of the miter box. I plowed out the slots for the bottom with my Veritas Small Plow Plane, smoothed the faces with my Stanley No.2. and chamfered the edges with my Stanley No.72. When I went to assemble the thing I quickly realized I was going to have to buy Chris Schwarz’s book on hand sawing when he publishes it. What a mess. Unsure as how to fix this, I came upon the brainwave of using my little bench hook as a shooting board and my little Veritas Low-Angle Block Plane to shoot the angles.

My little makeshift set-up absolutely blew me away. I shot all eight angles and was amazed at how clean they came out and how quickly those results were realized. My bench hook is made from a 1/2 inch piece of ply with a 1/8th inch thick piece glued to the end at right angles. Because there wasn't a backing board, per se, I was surprised that there was no tear out or splitting, even on the far end. One additional bonus from this set-up was to show me that my idea of an adjustable miter fence made a hell of a lot of sense, despite the naysayers. 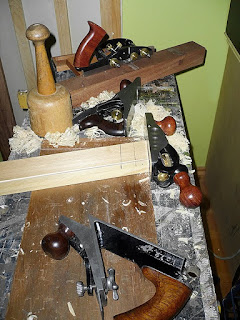 If you have never used a shooting board, get one. It truly is one appliance no shop can be without. If you have one, be thankful for it, and ya, I know, "So say I". On this one, though, you can take those words to the bank.

I may not come up right away with my original design, but starting this weekend, I am going to start building at least a simple example of one because I don’t ever want to cut another board without being able to shoot it afterwards.

Mitchell
Posted by theparttimewoodworker.blogspot.ca at 05:08 0 comments

Its What Is Not Said That Says It All…

There is one thing you can count on with the experts on the Antique Road Show. If you “messed” with the antique you are showing them, they will be very quick to point that fact out.

The phrase the experts usually use is; “You know the (whatever) is not original?” I am sure those few simple words sound different to the owner of the antique, especially if they are aware that the show has millions of followers whom hang on every word the experts utter. It probably ends up resonating in their ears as, “What the hell did you do to this beautiful antique, you moron?”

I am a huge follower of this show. While I find the British series more entertaining, I find the American version more educational. There is just more variety to American antique furniture, both in materials and techniques. Great stuff, the Antiques Road Show.

So here’s the point. Stephen did some serious restoration on a piece that was appraised by Leigh Keno on the Antiques Road Show. Leigh is not only one of the more knowledgeable in the show’s bevy of knowledgeable appraisers, but an appraiser who consistently uses the “not original” phrase. The only assumption I can come to for Leigh not mentioning the restoration work is because he didn’t notice it.

In his chosen profession, Leigh Keno is an absolute professional.

As it turns out, so is Stephen Shepherd.

Were there any doubts?

Mitchell
Posted by theparttimewoodworker.blogspot.ca at 18:57 1 comments

An Interview With A Tool Dealer...

The interview with Jim Bode, the Vintage Tool Dealer, is now finished and posted for your enjoyment.

I decided to post it in its entirety in one post instead of breaking it up into a few. Because of this, it is a rather big file, so I have posted it to my server, then linking to the file from here. Just click on the image below and you should find yourself facing about twenty minutes of entertainment.

Thanks again to Jim for making this thing work. He really put himself out for us and I appreciate it. 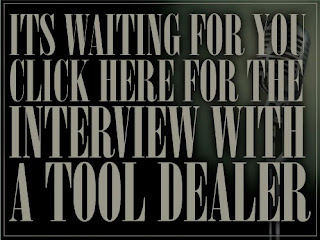