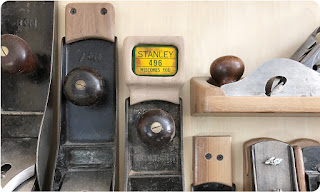 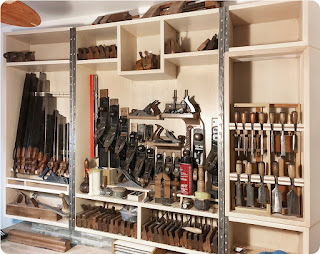 Mitchell
Posted by theparttimewoodworker.blogspot.ca at 15:59 3 comments

I Haven't Disappeared Yet...

I haven't disappeared yet, but because I have turned my wife's living room into a finishing room, I think she's looking for someone to make that happen.

This is where I'm at today. I have a couple of coats of clear coat on everything now, and I'm just going back to each surface and cleaning up any imperfections that I see before laying down another 4 or 5 coats...


This image was taken before this piece was clear coated...


This is probably the biggest pain in the arse project I have ever done and I will never do another veneer piece of this size again. The main panel is 54" high by 38" wide. It took me three attempts to get the veneer on the damned thing because I didn't make a veneer press like I should have and sections the veneer's soft grain just wouldn't lie flat. I'd get the veneer on it and veneer hammer it, then I covered it with plastic and then I clamped a same sized piece of ply down using cauls. I'd leave it for 24 hours and when I stripped the ply and plastic off, the panel's surface would be covered with bubbled veneer. I tried everything to get them to stick, but no luck, so I had to steam it off, sand the face and start again. Grrrrr.