Sometimes, something catches your eye and you immediately have to have it. That is what happened here.

During one of my usual weekly internet search for tools, I went to http://bobstoolbox.co.uk, a fantastic vintage tool shop in Liskeard, Cornwall, England, where I came across this... 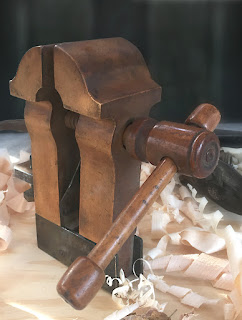 It was such a pretty vice, I had to have it, so for the reasonable list price of £58 plus shipping, it was on its way to Canada. When it arrived at my door, I was even more taken with it than I was when I saw Bob's image of it. 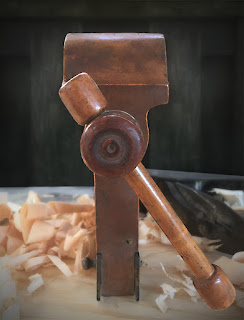 It is only a little guy, measuring 8" tall by 8" deep by 2 3/4" wide, but it is beautifully made and the wood is...well...just gorgeous. There isn't a maker's mark on it anywhere, which is too bad. I would have liked a chance to know a little bit more about the maker.
I'm not sure if it is dogwood or pear. I'd like to think it is latter, but it is more likely that it is made out of the former. 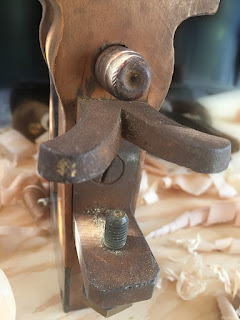 It has what looks to be a blacksmith made mount on the back of it. The mount screw is missing its swivel, lost probably when its mounting screw sheared, so replacing it will require a bit of fussing to extract the screw's leftovers. I really do not expect the mount to work very well, as this type of mount rarely does, but it is very cool looking, effective or not. 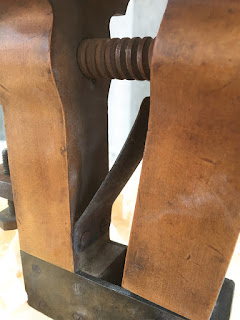 It has a piece of spring steel mounted on the inside-bottom of the rear leg, just above its mount point. The rear leg is fixed while the front one has two pivot points, one a half inch behind the other. The spring steel ensures the jaws separate from each other when the pressure is released.
I also bought a knicker with wedge for the H. E. Mitchell Filletster Plane I bought last winter, and a Veneer Hammer to spread the cost of shipping over more than just the vice. Bob charged me £20 for the shipping.

If you want to spend an enjoyable few minutes wandering around Bob's Tool Box without heading off to England, use this link to get you there...Bob's Toolbox 360° Virtual Tour. It's a little freaky to get used to, but it is also a real hoot.