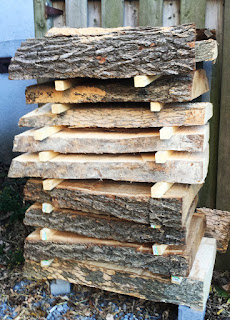 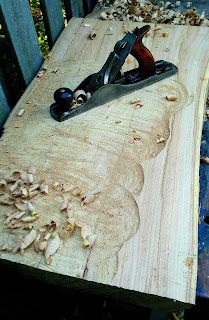 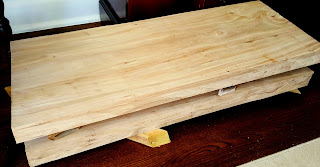 
Posted by theparttimewoodworker.blogspot.ca at 14:17 2 comments

It's Nice To Get A Handle On Things...

Here are the finished products. I really enjoyed this project. I made a few mistakes but learned a lot doing it. It also doesn't hurt that I'm really pleased with the results. 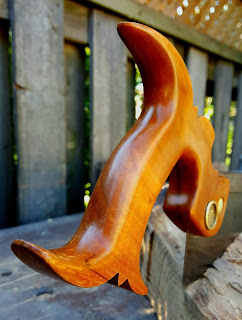 I don't think I'll be making another handle for anything for a while, at least until my finger prints grow back. I lost them during an estimated 28 hours of sanding. 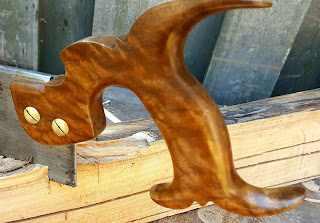 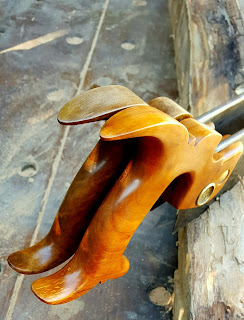 They then got 8 coats of amber shellac, rubbed out between each coat with 400 grit paper. I left them to dry for 48 hours, gave them a final sanding with 400 grit and then rubbed in 4 coats of Minwax Finishing Wax (I love that stuff) using #0000 steel wool, buffing them out between applications. 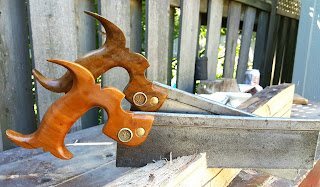 
Posted by theparttimewoodworker.blogspot.ca at 19:33 3 comments 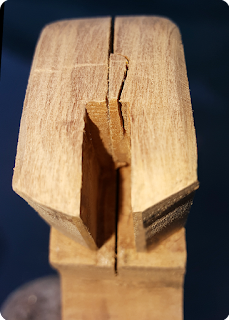 To fix it, I thought I would force some glue under it and tap a wedge between it and the opposite cheek. Once the glue sets, I could recut the saw plate slot.

If anyone has another idea, I would really appreciate hearing about it.


Posted by theparttimewoodworker.blogspot.ca at 17:52 0 comments

I came close a few times but luck saved my arse every time... 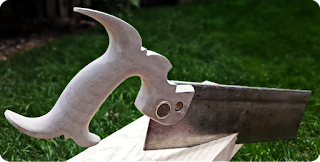 One of the problems I faced was completely of my own making. I decided to lower the plate a little bit more into the handle as too much of it’s back was showing. If I had noticed that while doing the drawing I could have changed the template to reflect the change, but dummy here didn't notice it until  the handle had been cut out, half shaped and the plate’s mounting slot cut into it. If you look above the screw studs you will see that I didn’t quite get the front hole right and the result is the plate is aiming downwards a bit. It is an easy fix, thank goodness. All I will have to do is adjust the top of the handle to match the angle of the plate. It will work, but it still bugs me.

I have now pulled the plate from the handle again so I can do a lot more sanding - not my favourite sport.