The Tale of Two Planes...

Ok, I'm anal. I'll admit it. I will also admit to the fact that the older I get, the more anal I become. I have come to realize that I formed some strange ideas about mechanical things over the past ten years or so. I will also have to admit that I will go to some pretty far extremes to meet those obsessions. Did I mention that I have also realized that many of these concepts I have developed are actually obsessions. No? Well they are. To name but a few, if the manufacturer made something as a set, I want the whole set, not just part of it. If things came in pairs, I won't stop until I have them both. No matter what they are, if they are mechanical, I like them all clean and shiny, and I like them to work like the day they came out of the factory, no matter how old they are. I haven't always been this weird when it comes to these things. Lord knows my old man tried to drum a toned down version of them into my stubborn brain, but only recently did the nickel dropped. The plane that has the staring role in this post is a great example of either how far I have come over the years with these things, or how far I have regressed, depending on how you look at it. 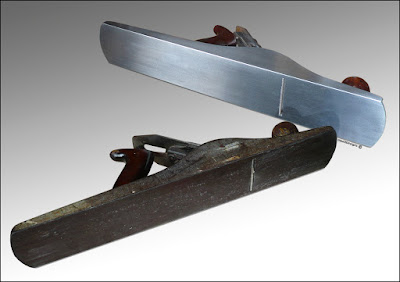 The plane up for discussion is a Stanley No.6, a Type 18. It was part of my "inheritance package" that I bought from my old man 25 years ago. There were three Type 18 planes included in the toolbox that he made his livelihood from over his career as a carpenter; a 9½ block, a No.4 and the No.6. The 9½ was cracked, so I trashed it, but the 4 and 6 were in pretty good shape. At least they were until I got ahold of them full-time.
Up until recently, if a tool's ability wasn't measured in horsepower, I wasn't interested. When I rebuilt a 40' wood boat, I had to replace about 30% of the hull's mahogany planking. You don't know love for something until you spend hours tweaking a grand worth of Honduras Mahogany so each gorgeous plank butts up nice and snug against its equally gorgeously grained sister, then, with the grain just glowing in the sunlight, you paint over it all with a thick copper based gunk so when you through the whole lot into the lake, strange, hairy things won't grow on it. It was with this No.6 that I was able to produce that "tight" hull, thereby keeping those strange, hairy things from growing on the inside of the hull as well. Once the hull was completed, though, that plane was unceremoniously dumped into a cold, damp dockbox and left to rust its way into the ugly mess you will see in the pictures that accompany this post.
When I was forced to let the horses loose and revert to hand tools, this plane was one of my mainstays in just about everything I built. All along I thought it was a No.7. I have no idea why, but I was pretty shocked to discover it was actually a No.6. One would think, with a large "No. 6" cast predominantly into the toe of the bed, I would have noticed it long ago, but like I said, it didn't have a horsepower rating. When I walked away from the power tools, this plane was the first old tool that I stripped and soaked in Evapo-Rust. Man, I scrubbed that sucker until my fingers were raw, but it still looked like hell.
While I came to love this old plane, I hated looking at it as it bugged the hell out of me. I had given it a predominate place in the toolbox and there is sat, day in and day out, taunting me, constantly forcing me to face the results of my disregard for it over the years. 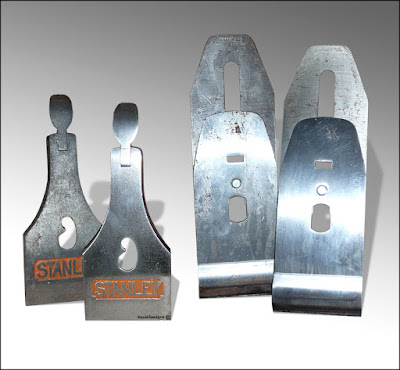 Then, one day while cruising eBay for even more planes, I came across a Stanley No.7 that was reasonably old, but looked brand new. I clicked on the link to see what it was about.
In the description, the eBayer had listed what he had done to this plane:

What really caught my eye was at the end, where the eBayer stated the following:
Now I know Chris Schwarz states, and states often, that larger planes do not need to have a dead flat sole. Chris would know better than I about this, as he is the true expert when it comes to all things to do with planes. Even as an pure, raw amateur, though, I can emphatically tell you that no plane requires engraving, but even Chris admits to being very partial to one of his that has his logo of a square engraved on each side.
Needless to say, I contacted the eBayer, sent off my No.6 and I am thrilled that I did. Next up, off goes the No.4.
If you are interested in having one of your planes rebuilt, the man to contact is Steve Nisbett of Wheaton, Illinois. You can contact him through this email address link.
So would the rebuilding of this plane make my old man happy? Nah. Oh, he would look at it with approving eyes and run his hands over the metal and new tote and knob, and then he would ask what the rebuild cost. After I answered him, he would put the plane down and gruffly inform me that if I wasn't such a a butt-head (he would have used stronger wording here) and had taken care of the plane in the first place, the cost of rebuilding it wouldn't have been necessary. As much as it hurts to say so, even now, he would be right, the grumpy old gas-passer (sorry, it was the politest way I could say it).
Peace,
Mitchell
Posted by theparttimewoodworker.blogspot.ca at 16:27