A Bench By Any Other Name Is Still...

I spent a lot of time thinking about the type of bench I wanted to build. I read everything Christopher Schwarz wrote on the subject, I sent away for plans from different online sources that I thought might give me a greater insight into what would work for me and I wrote a great deal about the thoughts I had regarding my perfect bench here, on my blog. Rereading those posts was a real trip for me as some of my ideas were really out there.

In the end, though, all of it was for naught.

Back in 2002 my son was a budding chef who wanted to hone his skills by cooking up a storm, even at home. To make his life easier, he decided to build himself a cooking centre, an almost 5' long bench set to a height that was perfect for cooking, a good butcher block top and lots of storage for the tools of his trade below. That summer he came down to the marina where my wife and I were moored and he joined me in the yard to use my tools to get his bench built.

This is what he came up with...

Less than a year later, he was taking his first step up the career ladder and onto a rung that happened to be in Scottsdale, Arizona. His moving budget was limited, as was the size of his new abode, so he had to find a place to store his cooking bench. Naturally, his old man supplied the answer and my wife and I have been dragging his build around with us ever since.

While we were on the boat the bench sat in storage. In our first residence, after we moved back to dry land, I set the butcher block top up to slide in and out, doing so without having to screw anything to it, and we used it as a breakfast counter in the kitchen. In our second residence, it served as a sideboard in my office and it held a lot of my junk. In our current residence, it again sat in my office and I stored a good portion of my tool collection in it.

I have been messing around with a remake of the tool cabinet I made over ten years ago and by the beginning of last summer I realized that no matter what I did, it was never going to hold my entire collection. I realized something had to be done and decided that maybe my son's chef's bench might be the answer.

The bench had a lot of pluses going for it when it came to doing a remake of it. First and foremost, the results would be a father/son collaboration, even though the individual participation would be over a decade apart. Added to that is the fact that the bench is built like a Sherman Tank and with a base that is 51" long, it would hold far more tools than my cabinet's 36" wide base could ever hold. It took me a while to build up the nerve to ask, but ask I finally did and I was surprised at my son's reaction. Either my son had no intention of ever wanting the thing back again, or he too liked the idea of the father/son collaboration. For whatever reason, he was quick to accept it.

Hauling the thing out to the patio this past summer, I went to work modifying it. This is the results... 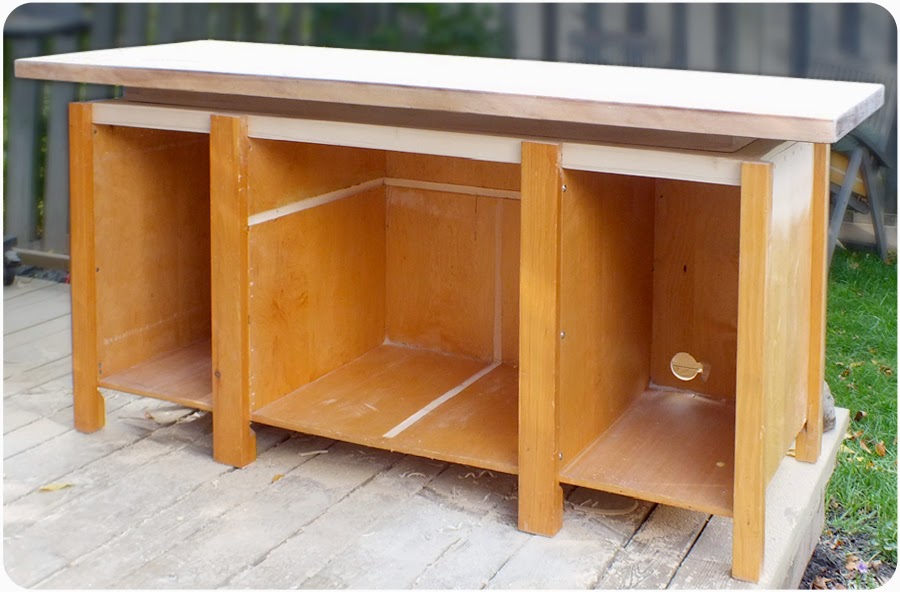 The first thing I had to attack was its height. My ideal height for a workbench is 30" while a chef's work height is 36". To bring the top down, I cut 1" off each of the legs and cut 7½" off the top edge of the carcass. This brought the height down to 27½". I will be adding levelling feet to the bottom of each leg, so that will bring the height up to 28½". I added a structural frame inside and flush with the top edge and a set-back frame to support the top. This set-back frame adds the remaining 1½" needed to bring the overall height to the required 30". 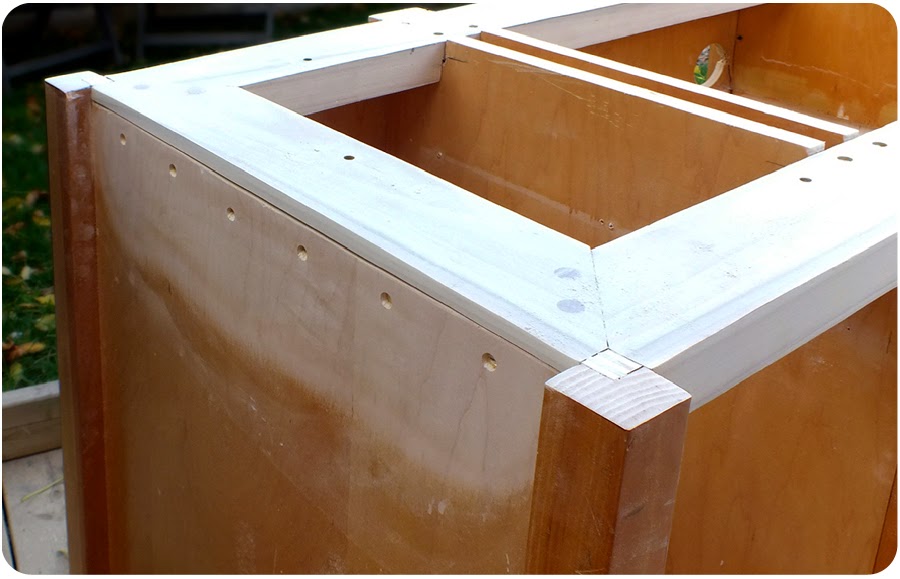 To install this frame, I cut 8" off the tops of the birch plywood sides and back panels and 7½" off the tops of the eight legs. I then built a 2" x 4" poplar frame with pegged corners that was rabbeted out to fit inside the carcass and rest on the top and back panels and fit around the protruding leg tops. I cut a matched pair of rabbets in the frame and the carcass' centre panels to tie them together. The frame was then glued into place and screwed around the edges, as shown in the photo. I think this will give the already solid structure an even better chance of withstanding the lateral pressures workbenches have to endure.

I then built the set-back frame... 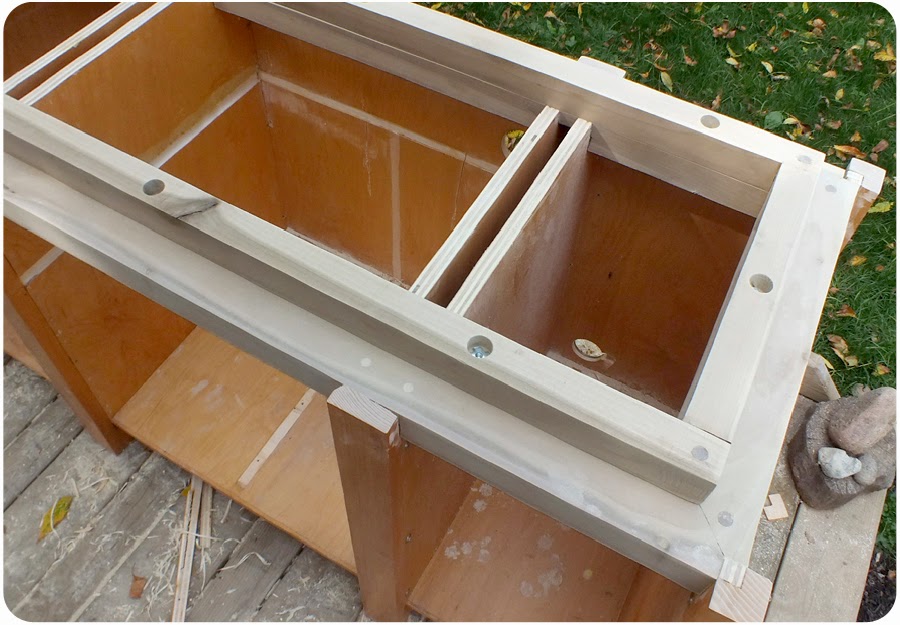 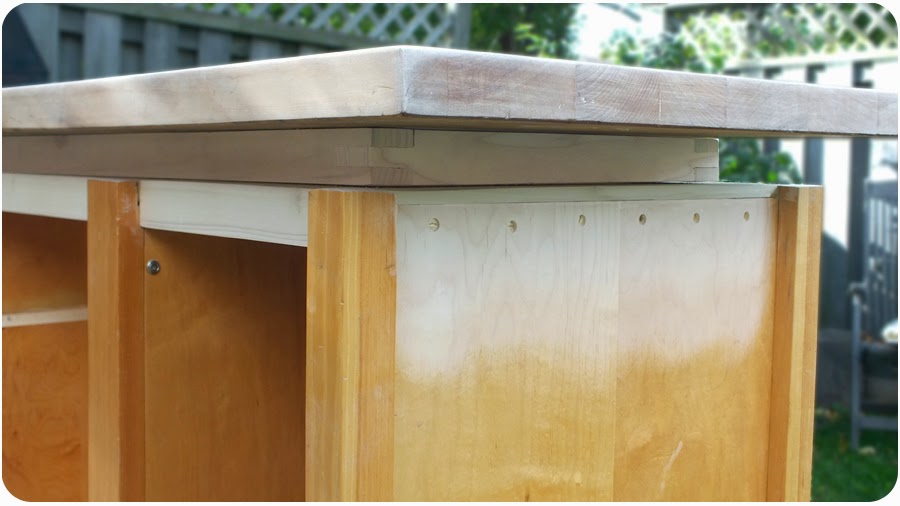 I made the set-back frame out of 1½" x 1½" poplar, pegged at the corners, to use to attach the butcher-block top. I made this frame 3" narrower and 3" shorter than the outer dimensions of the structure frame for two reasons. First, this 1½" set-back all-round will allow clamps to reach further back into the bench for glue-ups and holding stock. Secondly, it gives a break between the top's edge and the top drawers so I will have room to remove tools from those drawers as well as helping me see into the back of them. The top overhangs the carcass by 2" in front and I am using full-extension and self-closing drawer slides, so with the additional 1½" spacing, I should have full access to all the top drawers. To allow the top to be removable, I used six ¼" machine bolts screwed up through the structure frame and into T-nuts mounted in the set-back frame.

The bench will have 21 drawers by the time it is completed, then the whole thing will be covered in maple veneer. So far I have only the three top drawers made and installed as I have been held up going further because I am currently making my wife happy with a redecoration of the entire house. I will blog more about the making of the drawers once the job at hand is completed. If you are married, you will know that we have to stop what we want to do and do our wives' bidding if we ever want sex again in this lifetime, so bare with me on this.

Along with the 21 drawers, I will also be making a new top section to hold planes and saws, as well as some of those tools that I really enjoy looking at. To make the whole thing workable until this is done, I cut the top storage panels from my old cabinet and set them up on the new. Currently, this is what I am working with... 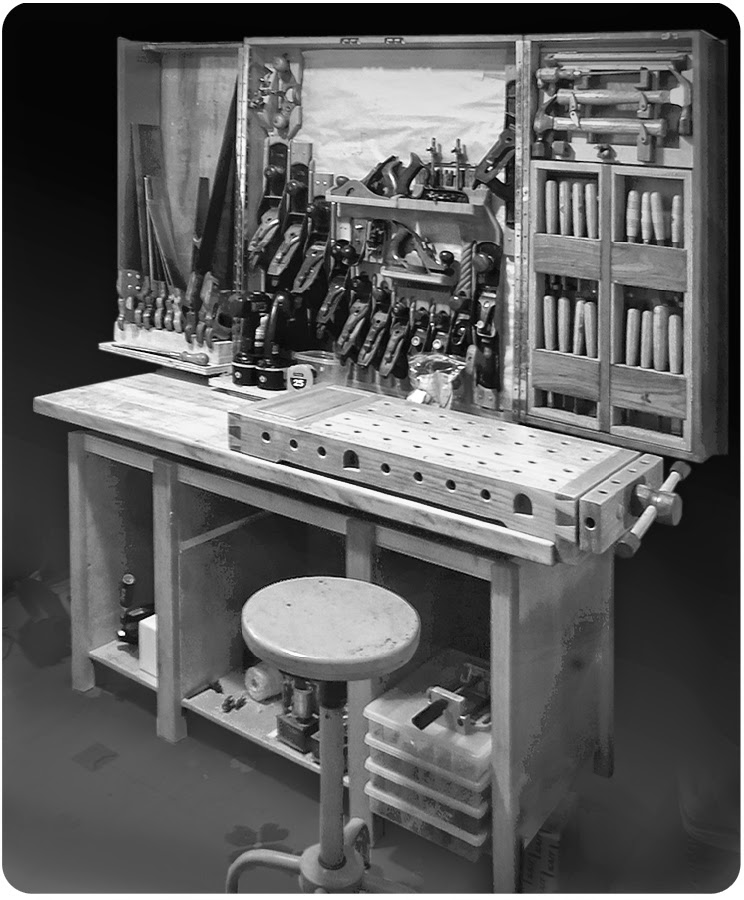