I am backing off my complaints about Lee Valley's proprietary restrictions that I encountered last week when I tried to purchase some plane parts.

Carol Litwack, Assistant Manager, Customer Service, Lee Valley Tools Ltd., called me late yesterday afternoon and politely explained to me why I could buy a short Norris Blade Adjuster, but not a long one. Simply put, they don't make them and they just don't have enough to go around.

She was also quick to point out that the run-around that I got last week from three different Customer Service Reps shouldn't happen again. Ms. Litwack explained that she saw how the wheels fell off the bus during my first contact with Lee Valley about this purchase and she has taken steps with her staff to minimize the possibility of this type of thing happening again. She handled the conversation well, didn't over-do the sorry-syrup, and said all the things that mattered.

Ordinarily, Lee Valley has one of the best Customer Service programs I have ever seen, which is why it is such a shocker to me that this came up. This particular screw-up was a result of their representatives not understanding the situation fully, not getting a clarification and, once another rep got it sorted out, mistakenly thought that being straight with the customer wasn't the wisest move. In general, retail customers are often a royal pain in the butt, but even the worst ones can spot bullshite from a 1000-yards. Ms. Litwack was straight with me and I appreciated it.

I am still not getting a long Norris-type blade adjuster from Lee Valley Tools, but now I know there is a rational reason for it being that way.

I have taken my design a little further. While I can't define it completely until I have the blade and adjuster in, I have kicked the look of the plane up a bit. I am also thinking of adding a brass blade bed to it, as well as a brass sole, all for durability, but a little polished brass wouldn't hurt its looks, either. 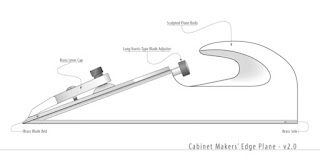 Mitchell
Posted by theparttimewoodworker.blogspot.ca at 06:32 0 comments

A New Project Results In A Goodbye To An Old Friend...

I always have been able to find something of interest on the Lost Art Press Blog. This time it was a "make it yourself" post for a plane that I have been actually looking to buy these past few months - the Cabinet Makers' Edge Plane. 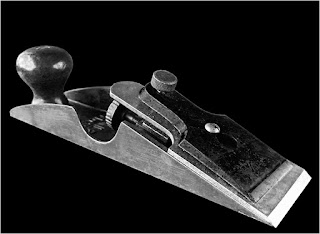 Depending on the way the blade is situated, it is either a flush-cutting plane or a bullnose smoother. If the blade is set flush with the sole of the plane, it will cut flush all day long. Extend the blade a sliver, and it becomes, according to Christopher Schwarz, a great smoother for blind rabates and stopped chamfers.

I spent a great deal of time these past couple days studying every video I could find on this style of plane and once I figured I had a reasonable idea of how it worked, I set out to design my own.

The original Stanley used the same type of blade adjustment as their 220 block plane, but for mine, I think I'm going to go with a Norris type adjuster. I'm planning to use the same type of lever cap, though. The only other major difference is that my body will be made out of a nice hunk of Rosewood, rather than a casting. This is just a rough layout for this plane, as once I get the 2" blade and the adjuster in my hands, I'll be able to take it further.

To get the required parts, I turned to my usual supplier for all things toolie; Lee Valley. They have 2" lever caps that they use on their Low Angle Smoothing Plane, but they are not listed in their online store so I emailed them to ask if they would sell me one. Whoever I was dealing with said she would speak to the powers that be and get back to me, which she did, telling me they would sell me one for the crazy low price of $14. I was more than pleased.

Originally, I had planned to purchase their "Wooden Bench Plane Hardware Kit", which includes a 2" O1 blade, a short Norris adjuster with seating cap, and the necessary items needed to make a wood lever cap, all for $56, but I noticed a glitch with the adjuster. With the design I was looking at, the short adjuster was just too short. If I used it, I would have to cut away too much of the body to give room for my fingers to get at the knob, so I emailed them again asking if I could purchase their longer Norris type adjuster, the one that they use on their 5 1/4W Bench Plane. This is when the ball of string started to unravel.

Basically, they said no, you can't buy a long one because we have no record of you ever buying a 5 1/4W Bench Plane. I was half expecting this as I ran into their proprietary issues when I was converting an old Delta water stone sharpener into a dry sharpener. This, however, was worse as they were telling me that there was no issue selling me a short adjuster, but damned if they were going to sell me a long one. If I wasn't so pissed, I would have laughed. I told them to basically shove it.

I ordered a Lie-Nielsen 2" blade and bought a Norris type long adjuster on eBay. I also found a couple of lever caps that would work, but I decided to make my own from some brass stock, just to say I have done it. Once the blade and adjuster come in, I'll be able to finalize the design and get to work cutting a hunk of Rosewood that I actually bought from Lee Valley a few years ago. I also bought a package of oval headed brass screws from them as well, one of which will work to hold down the lever cap.

Am I being too bitchy about this? Maybe, but if they could tell me I never bought a 5 1/4W Bench Plane from them, they could also see that I have been a customer of theirs for decades and that I haven't been shy about spending my money with them. It would appear that my loyalty and spending were only worth a short adjuster to them as it appears they are saving their long ones for their real high rollers. Their loss, not mine.