While I was sitting around recuperating and watching every B-movie Netflix has to offer my mind kept running through my “bucket list”. What ever happened to the “ToDo List”? Who the hell came up with the stupid term, “bucket list”? Anyway, the more time I spent thinking about it the more I came to realize that the damn thing had sprung a leak. When it first came to mind it held an ungodly number of items. By the time I got off my butt and got to work on striking the items off of it, there was only one left on it to tackle as I realized that all the rest were fluff and bullshit.

Now most of you that read this will think that when my mortality kicked me in the head a couple of months ago, it shook a few screws loose and suddenly I am now starting to prepare for death. That assumption would be the opposite side of the truth. I never had a near death experience, or anything that even came close to one. Hell, when they were wheeling me down to the operating room all I was thinking about was getting out of that place so I could see my dog. I should explain that my wife was with me the entire time I was in the hospital but the dog wasn’t. The bases for this newfound purpose in life is on other thoughts, as I have no plans on dying anytime soon.

Here’s the deal. What struck me one day like a ton of bricks was that fact that out of everything my parents left behind - the bit of cash, the bit of real estate, the basement full of knick-knacks - the only thing that matters to me then and now is my father’s old tools. The fact that I paid him cash for them while he was still alive doesn’t hinder their meaning to me one iota. They were a part of him and that part sits in front of me day in and day out, 24-years after his death and I expect them to mean the same to me 24-years from now.

It was his little bit of his legacy that caused me to spend the last however many years adding to them, expanding the scope and depth of his collection. I have the 5 planes he made a living with and have added many more to expand the set. I have replaced tools of his that I destroyed when I was a kid and added others that I know he would have liked to have. What all of this means is that my legacy has become one of adding to his. This is what I want to leave to my son when it is time for me to move on. I don’t want him to feel obligated to keep the legacy going; he can dump it, sell it or put it in his basement and forget it. What I hope he does get from it, though, is that we are all part of who came before us. Whether we go off in an entirely different direction or stay constant to generations past, we start, because of nature and nurture, with the person who came before us as our base. As difficult as my old man was, I am proud of the fact that I am based on who he was and it is that concept that I hope to pass on to my son when he takes possession of these old tools.

In my defense, dealing with life has certainly got in the way of reaching my goal of building the kick-ass combo tool-cabinet/work-bench that I wanted to build. I also realized, though, that part of this downfall could be placed squarely on the fact that I love the look of tools and putting them away in a cabinet will put them out of sight. If I built the tool-cabinet/work-bench that I had in mind I wouldn’t have them spread all over my office shelves like they are, and as a result, I wouldn’t be able to look at them every day like I do now.

The only way to deal with all this is to rethink my original concept of a tool cabinet. Instead of making usability the priority, I have to rework the design to place the display of the tools at the forefront. This isn’t going to be easy, but for my own satisfaction, it has to be done. The result of going at this tool cabinet again not only achieves what I want to pass on to my son in the end but it will also allow me a fantastic sight day in and day out until the times comes around. Ok, it is a little selfish, but what the hell.

Originally, my tool cabinet started out looking like this… 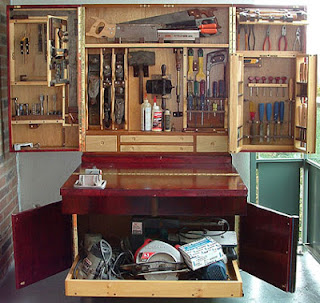 The problem I had is that I kept buying more tools. Over time, I went from less than a 100 or so to way over 300 and the cabinet wasn’t originally built to store that many. I dumped the power tools in the bottom and added a third drawer in the base, which made the doors on it a pain, so they came off. I then started to reconfigure it, doing a complete overhaul three times and not scoring a winner with any of them. I was trying to make it another Studley chest but without his abilities, so naturally I was doomed from the start.

As a result of the added tools, the cabinet ended up looking like this... 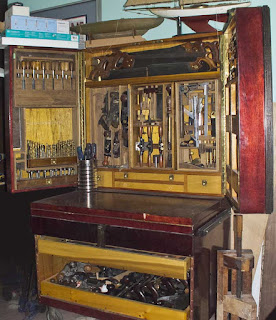 The cabinet is made from mahogany marine plywood and while it needs some changes to the outside design, I do like it. It would be a waste to throw it away so I am going to have to modify it. That means increasing the depth of the centre section from 4 ¼” to a full 9” and increasing the depth of the two wings as well. I’m not going to draw up any plans for it, as I don’t enjoy working from them. I find working from plans constricting and I get a much larger buzz working from my head, changing things as I develop new ideas.

I’m starting with the centre section and the first order of business is to strip out everything I don’t like about it and start from scratch.

Here is where it sits today… 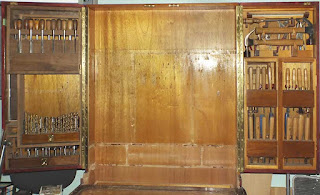 Mitchell
Posted by theparttimewoodworker.blogspot.ca at 17:45 3 comments

It is getting on to spring and with the warmer weather comes the Tools of the Trade Show.

I have always truly enjoyed this show and have dealt with some of the best in the vintage tool trade there every year. I expect this year will be no different.

The show is held at the Pickering Recreational Centre in Pickering, Ontario, a town located just north-east of Toronto. You can get to it along Highway 401, and if you go, you won't be disappointed. Get there early, though, as the boys line up before the 10:00 am opening time so they can get dibs on the best stuff.

It would be nice to see representatives from the likes of Jim Bode Tools fame and The Best Things, but I'm not going to hold my breath. Sadly, a lot of our American cousins that are in this business like to sell to us Canadians, but damned if they want to meet us face to face. Thankfully, Martin Donnelly of Martin J. Donnelly Antique Tools fame, never misses making the trek up here to meet and greet many of his existing customers, as well as using it to schmooze some new ones. 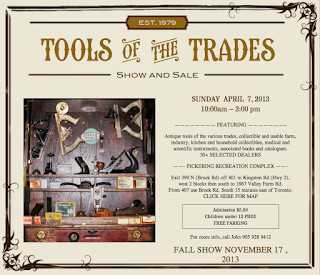 If you need more information or you are a dealer, the shows website is here.

Mark Sunday, April 7, 2013 on your calendar, save a few shekels for the date and get your tuches up here. It is well worth the trip.