The Tools of the Trade Show and Sale was held today in Pickering, a small community just north-east of Toronto. Many of the usual dealers to this twice-yearly event were on hand, with a couple that I hadn't seen before. I arrived fifteen minutes after the doors opened and was shocked at the number of people walking the booths looking for tools. It was probably one of the best turnouts that I have seen. There were so many people swarming the booths that I gave up trying to take photos of the wares.

Standing at the loo just before leaving, two dealers came in and bellied-up on either side of me and proceeded to discuss their poor sales for the morning. Just to remind them that I was standing between them in a rather vulnerable position, I commented that there didn't seem to be many in the crowd that were carrying packages. One of them replied that the reason for this, it seems, is that "they have everything already". As it turns out, the hall was chock-full of people, but the vast majority of them weren't buyers.

I can't say that I can blame the dealers for this situation. I checked out the pricing of every booth and each one had prices that reflected the economic reality of the day. In most cases, it was depressing to see what they were selling things for. An example of this was a Stanley No.10½ that I saw in Doug Orr's booth. It was right in that sweet spot for me; almost too good to be a user, but not quite good enough to be a collector. He was asking $110 for it, far below what I feel is a fair price, which would be $185. Not to prove the loo-dealer right, but I already have a really good 10½, so there was no reason for me to bite.

Another dealer had a Casey round plane, probably one of the widest I had ever seen. While records state that hollows and rounds run up to 1½-inches wide, I swear this one was at least 2-inches. It was so wide, at first I thought it was a gutter plane, but it was toteless. As I had flashlight in hand, checking out every makers stamp on every wood moulding plane in the place looking for H. E. Mitchell planes and saws, I saw that the maker's stamp on this one was, "Casey & Company", the precursor to "Casey, Kitchel & Company", "Casey, Clark & Company" and, of course, "Auburn Tool Company". In my opinion, this was a relatively rare moulding plane for which the dealer wanted a piddly 40-bucks.

So things were very close to a "perfect storm" category. The dealers had the right stuff. The prices they were asking as a starting point were fair. The buyers were out in full-force. The only thing missing to make the sale a success was bank managers - they just weren't onside this time. 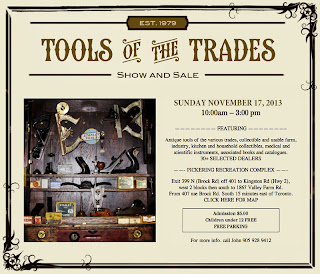 The fall show will be held on November 17th this year. If you want more information about it, you can find it at http://www.ontarioantiquetools.com.


Hopefully those bank managers will come around by November and it will turn into a winner for the dealers and buyers alike. It wouldn't hurt if one or two of the dealers found a few H. E. Mitchell tools for me, either.

Posted by theparttimewoodworker.blogspot.ca at 13:57 0 comments

I Knew There Was One Out There...

In a past post I asked if anyone had a vintage tool made by H. E. Mitchell. I mentioned that I would be either willing to buy it, but if it wasn't for sale, I would be grateful for a photograph of it. Someone was kind enough to follow through with that request.

I woke up a few weeks ago to find the following two images in my InBox... 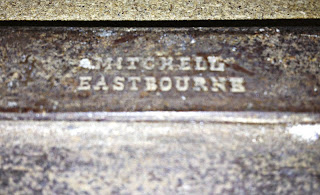 The sender didn't include his or her name, nor was there any text at all accompanying the images. Just the photographs.

After a quick look I knew this saw was made by ol' Henry, so I quickly replied with a "thank you" and asked if it was for sale. I didn't receive a response, which was disappointing, but at least I now have an image of an elusive saw made by H. E. Mitchell.

This is huge for me - really huge.

In all the years I have been searching for H. E. Mitchell tools, I have never seen a saw of his, even though he stated in all his advertising that he was just a "saw maker". I saw an outdated listing for one that sold in an auction back in 2005, but it didn't include a picture of it. All this time I had no evidence that the man ever made one. Then these showed up. Wow.

The maker's stamp on the saw dates it from 1865 or 1866. I say this for two reasons. First, it has the "Eastbourne" address and ol' Henry only worked out of Eastbourne from 1865 until he went bankrupt in February of 1868. He then moved to North Road in Brighton and started again. The other reason for dating it from these two years is that the stamp only says, "Mitchell". Henry realized that his stamp could be confused with other tool makers named Mitchell so in the later half of 1866, he added the "H. E." to it.

Whoever sent me these photos, I thank you very much. You really made my day - week - month. I may not have the actual saw, but at least I have photos of one to show that the man actually made them.