A Fantasy Becomes A Reality...

I’ve mentioned my ongoing relationship with eBay within these posts a few times. When we started this liaison, she promised me she would scan all the new listings that get added to her Collectable Tools section and offer me any that display the word that might turn me on; “Mitchell”. My part in all of this was to promise her that I would check out all that she had to offer me, “doing the dirty” with any that tickled my fancy. The old girl and I were going hot and heavy for a few years, but sadly, over the past year or so, it seems she has lost her ability to excite me. Bless her little heart, she did her best to entice me every week or so, but her obvious willingness just didn’t seem to do anything for me any longer.

The problem I had with her over this past year or so is that she started to repeat herself. She just couldn’t seem to find anything new to add to her repertoire, but instead, kept offering me the same old Adams Handrail Molding Plane with a Mitchell of Sheffield blade, a Mitchell & Co. Circular Compass Plane and a Mitchell Newhouse Lumber Co. Carpenter’s Nail Apron that she had tried to entice me with many times before. Instead of finding new Mitchell enticements to turn me on, she kept sending me relistings of the ones she had offered me many times before. I was beginning to tire of her.

Then, out of the blue, she suddenly got frisky and offered me something I have been fantasizing about for years.

I have to admit that my tool purchases have faded to zero this past year or two, but it is not through lack of trying. This calamity is a result of not having come across anything I really wanted to add to my collection. I still check out the vintage tool sites, but admittedly, not with the ferocity I once had. The one exception, however, is my search for any tools made by H.E. Mitchell of Brighton, England. Given the strong possibility that he and I are related, collecting examples of his work has admittedly become an obsession. In an attempt to assemble as many of them as I can, I still search the all the tool auctions and sales sites almost daily. Mitchell produced all types of joining tools throughout his career, but only advertised himself as a “Saw Maker”. The thing is, I have never come across a saw made by him in all the years I have been searching out examples of his work. The closest I ever came was finding a five-year-old listing for one offered in a Brown’s Tool Auction, meaning the saw was long gone.

A few weeks ago, though, my little sweetheart, eBay, suddenly gave one up.

A fellow from Oregon named “she352” had a listing entitled, “Mitchell of Brighton (England) 14” tenon saw”. I couldn’t believe what I was seeing. The listing included an array of good photos and a description that made sense. I was so excited, I didn’t read his shipping limitations and didn’t notice until this morning that it stated, “May not ship to Canada”. The listing was only a day old and I don’t remember if anyone had submitted a bid for it by the time I got to it, but I didn’t care. I hit the “Buy It Now” button, more than willing to pay the $90 he was asking for it.

As luck would have it, she352 turned out to be an above-board seller. When I got back on the computer the following morning, he had invoiced me for the $90 purchase plus a very reasonable cost to ship it to Canada, without even a mention about the “May not ship to Canada” statement that I hadn’t seen. Two weeks later, the postman was knocking on my door with my well-packaged saw in hand.

And what a saw! 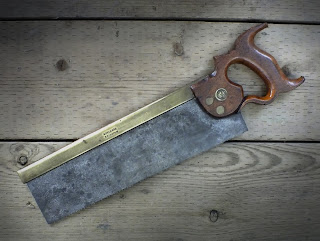 I don’t have a micrometer, so I couldn’t measure it, but the blade is relatively thick, as I think a tenon saw blade should be. It is 3” deep at the toe and 3¼” at the heel, so there is plenty of meat still left on it. The brass back is 7/8” high by 3/8” thick. To say this is a heavy saw is an understatement as it weighs in at whopping 2¾ pounds, considerable heft for a 14” saw. There is no stamping on the blade, but the count of the teeth tells me it is filed 12 tpi, without a tooth missing in the lot. The blade has a very slight bow; so slight I didn’t notice it until I sighted down the blade for the third time, this last time using a strong light behind it. The blade has a lot of discolouration, but no pitting whatsoever. I rub down all my blades with wax, using a fine steel wool. I don’t know how much of the staining will be removed when I get around to treating this blade, but other than adding a bit of a shine, I doubt it will make much of a difference to it. 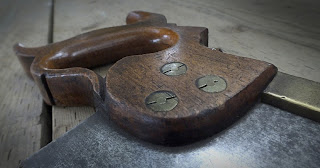 The handle appears to me to be made of apple and I think it is a pretty one. 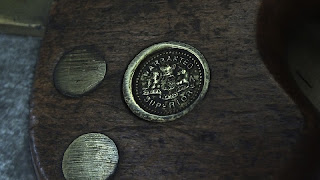 The blade projects into the Boss a full 2¼”, held to the handle with two flush-faced brass screws and one medallion screw with the usual “Warranted Superior” emblazoned on it. All three screws use brass split nuts set flush on the opposing side. There is a small chip at the end of the well-defined, tapering Lamb’s Tongue on the right side of the blade and judging by the colour and wear of the break, it was done decades ago. 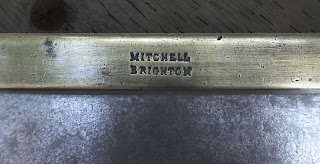 For me, the beauty in this well-made saw is in the stamp. Goodman, in British Planemakers, states that Henry Edward Mitchell started making tools in 1855. My research, however, tells me that Henry didn’t open his first shop until ten years later, doing so in Eastbourne, Sussex in 1865. His maker’s mark for this business was “Mitchell, Eastbourne”. His first shop had a short life, though, and he was forced into bankruptcy in 1868. He jumped right back up on the horse again, though, this time at 15 North Road in Brighton, changing his maker’s mark to, “Mitchell, Brighton”. By the mid-1870’s he was in full production at 4 North Road, Brighton and he changed his maker’s mark so his products wouldn’t be confused with any of the other Mitchells making tools at the time. His saw stamp was “H.E. Mitchell, Brighton”, and the stamp for all his other tools was, “H.E. Mitchell, 4 North Road, Brighton”. In the late 1880’s or early 1890’s, he added a lion’s head above his name on the stamp he used to mark his planes. Based on this history, I calculate that this particular saw was made between 1869 and 1974.

I discovered that Mitchell was very successful financially. He grew up a soldier’s son in the slums of London in the first half of the 19th century and went on to retire at the young age of 58 in 1900, spending his retirement years “living by his own means” in a country villa with a servant or two to tend to his daily needs. The guy was a hustler, through and through, and reaped the rewards of his life’s work as a result. This is what makes collecting examples of his work so frustrating. I just can’t figure out why tools made by someone this successful are so few and far between, especially the mainstay tools of his career – his saws. It makes no sense to me, but now that I have one, I am no longer going worry about it. 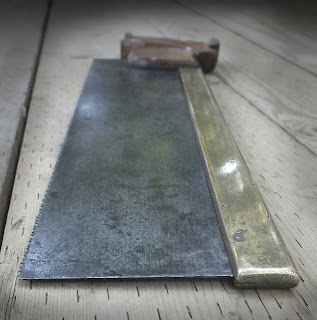 This is the first vintage tool I knew I would never use when I purchased it. When I switched from horsepower to handpower, I committed never to buy a tool that I would never use, but this one is the exception. For me, this one is far too special to do anything with, other than to polish it up and make a special display place for it in the tool cabinet.

To others, this may be just another old saw made by an obscure maker, but to me, it is my “Pièce de résistance” – a special addition to my special collection of woodworking tools made about 143-years ago by a relative of mine. When it comes to tools, it just can’t get any better than that.