Keep Your Two Front Teeth and Give Me...

It is Christmas…well…actually, it is Boxing Day, but close enough. Let me wish all of you the very, very best for the holiday season and may the coming year bring with it health and happiness for you and your families.

While I have spent a great deal of time over the past few days thinking about Christmas’ past, I have also spent some time thinking about what would be my ultimate Christmas present. While I came up with a number of them, I thought I would share a couple of them with you.

Here are three requests from my 2014 Christmas gift list for Santa:

Posted by theparttimewoodworker.blogspot.ca at 15:18 1 comments


When I started this remake of my tool cabinet I decided to keep it simple, letting the tools speak for themselves, so-to-speak. I thought the best way to do this was to keep the extras limited to simple curves, but theory and practise don't always jive.

The mount I'm working on is for the Stanley No. 50, a little bodied plane that has a great deal of projections that make it end up being pretty cumbersome. When you add in all its bits and bobs, you come up with a mount that is pretty massive. The end result reminded me of those old continental kits the more-is-better crowd used to bolt to the ass-end of their cars back in the 50's. Somehow I had to get some balance in it.

To do this, I decided to tie in a couple of other plane mounts, thinking that adding more wood below it would trick the eye into seeing its height, rather than its depth. It actually worked, but it added another problem in the process. The additional height resulted in a fairly large expanse of wood, nice wood mind you, but still a lot of wood. It needed something to break up the expanse, but retain the height it needed. I needed to add a little interest to the wood.

To accomplish this, I decided to add curves - lots of them... 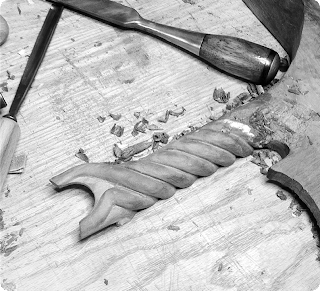 I have to admit, this is the first time I have tried my hand at traditional carving. Given this was my first time out of the barn, I think I did all right with it.

I still have a bunch of work to do on this mount, so I'll leave the rest of it until later.

Posted by theparttimewoodworker.blogspot.ca at 16:58 1 comments

Update On My Portable Vise Design...

A few weeks ago I posted an article about a portable vise I had designed. Before it was posted I had already placed an order with a local wood supplier for enough Beech to build it, but hit a snag a few days afterwards. The yard had problems coming up with Beech in the thickness I wanted, which was 1½". I called around to a few other local suppliers and heard the same story; nothing thicker than 1". I found that I could get the stock I needed from a supplier in the States, but was shocked at the cost to ship it up to me. When I stated such, the supplier said something that made me rethink my choice of Beech for this project, which was; "Beech isn't exactly the lightest species of wood." Given this is supposed to be a "portable" vise, naturally this comment caught my attention. I ain't gettin' any younger here, so not wanting to have to slug around something that weighed a ton, I thought I should do some more research.

Almost everything about workbenches that I came across stated that Beech was the material of choice, mainly due to its "density". Why everything to do with woodworking has to be so bloody technical, I'll never know, but I decided to see if there were other species of wood that came close to Beech's "density", but weighed less. I had seen Density Values listed on many different wood suppliers' websites but I really didn't have a clue what it really meant, so I decided the first up on my agenda should be figuring out exactly what the hell "density" meant.

I really have to be honest here; I am so far removed from an analytical thought process, I don't even fully understand what that term really means, so trying to decipher pretty much all of the definitions for "Density" that I found was as impossible for me as making cream from sand. Why do those that post definitions on the web think everyone is as like-minded as they are? Hell, if I could think like them I wouldn't be reading their damned definitions in the first place, but instead, I would be posting my own, which, I must admit, is exactly what I am going to try to do here, but one I came up with that, hopefully, rewrites the gobbledygook in laymen's terms.


So putting all rational thought aside, I took my new-found knowledge for a test drive and learned...


One of the main things I learned through this exercise was that I wasn't as smart an ass as I thought I was, so I'm going to have to head back to the drawing board and come up with a better design for this portable bench that is lighter, but just as strong. I also learned that it will have to be made from...go figure...Beech, and more specifically, Beech in 1" thicknesses.