I have always been leery of Facebook and I didn't take the plunge with it for years. Finally, I jumped and while it was great keeping up to date with friends and relatives, I still tended to go back every few months and delete whatever I could find that I had posted previously. Paranoid? Probably, but who ever said I was rational?

After Donald Trump won the election, however, things very quickly changed. I'm not going to get into a political discussion here because my political affiliations and beliefs are none of your business. I do have to say, though, that after that election, I suddenly discovered that many of my friends and relatives were crazy. Many had gone completely crackers. A couple of my relatives have IQs of a gazillion or more, but it seems that their intelligence was unable to help them cope with the loss of their beloved Democrat, which made no sense to me at all, because they are Canadian, for God's sake. When I had finally had enough, I stopped going on the site, then about a week later I went on and tried to delete my page.

So I deactivated my Facebook page and three or four days later I did my usual start-off-the-week Google search for tools made by H. E. Mitchell. A hit came up for a Filletster Plane that was made by Mitchell, so I quickly hit the link and found myself on Facebook reading a flag that said, "Welcome back, Mitchell. Please sign-in to proceed." Damn! So I signed in, looked at the posting for the plane and contacted the seller to see if he would be willing to ship to Canada. He was, I paid, he shipped, I got, and I have to say, it is a pretty cool looking plane... 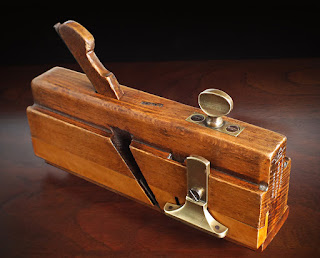 Filletster Planes are specifically designed to cut rabbets or half laps, and come in two styles. The first is the Standard Filletster. This style of plane has an integrated, fixed fence that is part of the plane's body. The second is the Moving Filletster, which involves some pretty specific criteria to be met if the plane is to be called this. The plane must have a skewed iron, a flat sole, a moveable fence and an adjustable depth stop. The fence can be held and adjusted using two screws that run through the fence and into the body of the plane, or an armed fence, similar to those found on a Plow Plane. My latest plane purchase, with the screw-type fence,  has all four of these features so it can properly be called a "Moving Filletster Plane". 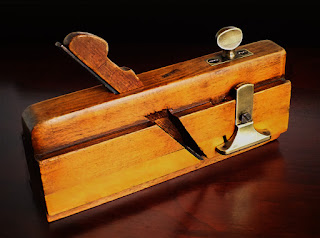 My Filletster Plane does have some issues, the main one being a missing Nicker Blade and Wedge to hold it. I going to have to research what style of Nicker Blades Mitchell used because this example has a bit of a strange setting. The slot for it that runs down the edge of the body just in front of the iron is 1/4" by 1/2", the 1/2" dimension running front to back. The exit of this slot on the sole of the plane is 1/8" by 9/16", the longer dimension running from side to side. Weird, eh? It would make more sense to me to have those dimensions turned 90°, so it is going to take a little research to figure out what kind of blade to make. 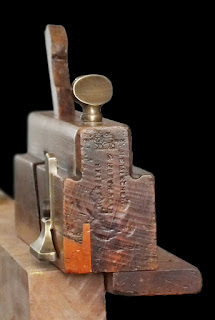 Another problem with the plane is the Escapement. It looks like someone wanted to make the throat a little deeper so they went at it with a tool that was definitely not suitable for the job. It is going to take some real patience to get that cleaned up. 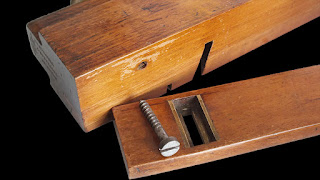 Other than those two issues, it is a damned nice plane. The grain of the body is straight and clean. The blade is completely useable, and the fence and depth stop work like a charm. 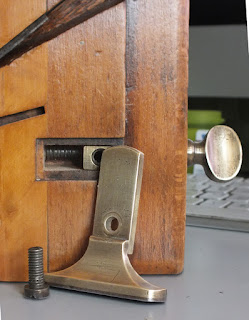 The plane was probably made around 1890 to 1900 as the maker's mark includes the Trade Mark lion, something Mitchell didn't have on his mark until that time. I am also curious about the depth stop mechanism. While there are some slight changes, the overall shapes and the way those shapes work together on my plane are very close to being the same as those shown in the photo below, especially the fact that both mine and the one in the photo have a 1/16" slice of steel covering the bottom of the depth stop foot. Was there a company out there suppling parts like these to plane makers, or did one maker blatantly steal the designs of another maker, without bothering to hide the theft? 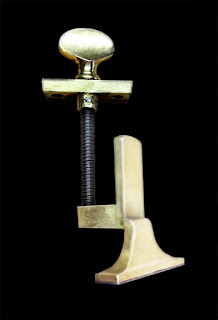 Most importantly for me though, is that happy stamp of the nose of this thing... 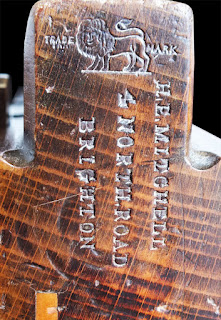