Every so often you come across somebody's work that just blows your mind. This is one of them; Aaron Radelow's site features his furniture and marquetry skills that are far and above the norm. Simply put, his work is bloody amazing.
Peace,
Mitchell
Posted by theparttimewoodworker.blogspot.ca at 16:40 1 comments 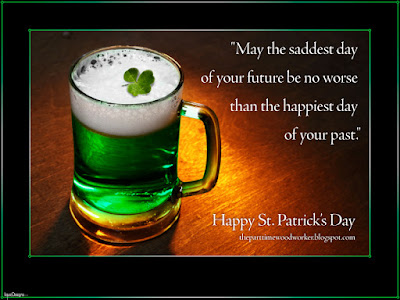 Posted by theparttimewoodworker.blogspot.ca at 14:37 1 comments

What Do The Others Have Mitchell Doesn't...

I received an email from eBay a couple of weeks ago informing me that there was a new “Mitchell” listed. As I get these about once a week, I really didn’t get too excited as these searches have never produced the Mitchell I want. This one, however, turned out to be different.
When I opened the email there was a smoothing plane staring me in the face. The written description stated, “This a nice wood planer. On the top and side of the planer block is stamped "W.SUTER". It also has "H.E. MITCHELL 4 NORTH ROAD BRIGHTON" with a Lion trademark. The wood planer is 71/2'' long and in good condition.”
It had been listed the night before and had a long week to run, so I emailed the seller, bluehitch, and asked if he had a “Buy-It-Now”. He was great to deal with; honest, straightforward and pleasant. We ended up striking a deal and he shipped it out in record time.

So here it is… 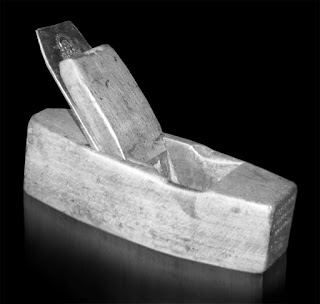 Here’s the thing. I’m a neophyte when it comes to stuff like this and really don’t have a clue. Take away my books and I wouldn’t know a jack from a jointer.
I do know this is one of Mitchell’s later planes as it is stamped with his lion logo. I calculate he started using this logo around 1885 to 1890, using it for ten or fifteen years before he converted his business into an incorporated iron monger making products for stores and offices. 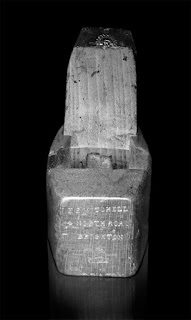 It has a 2” wide Ward & Payne Cast Steel blade that is 6 1/8” long. I know nothing about Ward blades except what I read in Goodman’s. I am saying this is a Ward & Payne as it has the crossed hammers, the W. and P. initials and the anvil stamp. It has a smaller anvil roughly stamped above the marker’s stamp as well. Goodman puts this blade between 1860 an 1900. It also has a nameless thick, heavy chipper. 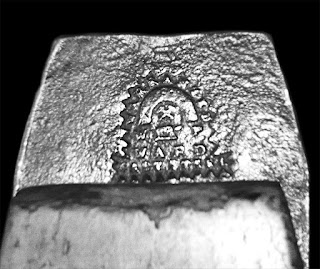 This plane also has something I am definitely not sure about. On the sole, in front of the mouth is a honking piece of brass. I can’t figure out if Mitchell put it there, or if someone resuscitated the plane later in its life. The plate is 1/8” thick, wedge shaped, with dimensions of 2 ½” wide by 1 ½” deep. 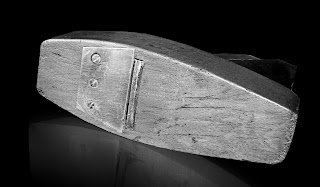 While it is not badly done, it isn’t centered to the sole. Other than that, I can’t find any clue when it was fitted. The throat, if modified later in life, doesn’t give it away. The rear-facing angle looks original, and when it gets within a ½” of the mouth, it drops straight down so you see about a ½” of the brass plate. I have a feeling it is original to the maker, but even I would trust my opinion, so why should you? 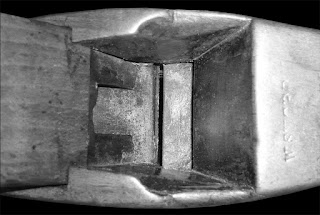 It is 7 ½” long and 2 ¾” wide at the mouth. It has a few areas that have some issues which I haven't figured out what to do with yet, so all I have done so far is give it a quick rubdown with wax and steel wool. 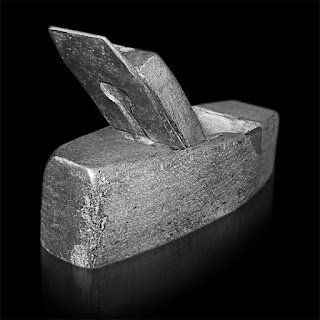 I have rattled on about H.E. Mitchell tools for a few years now and I still can’t figure out what is up with his stuff. They are as rare as hell, yet they don’t fetch a dime more than average, if that. It is not like ol' Henry ran an assembly line producing these things. This plane brings my total collection of his planes to 10; a plow, a smoother, a pair of sashes (sizes 1 and 2) and a set of six beaders. They all seem to work well, feel right, are solid, not warped, hold a blade and everything about them seems to me to be complete and tight. In other words, from the perspective of a guy who, until recently, thought planes weren't worth a damn unless they came with a full horse motor, ol’ Henry produced some fairly well made products.
This, of course, brings to mind the question; why is it that I seem to be the only guy in the world who collects this maker’s work?
Peace,
Mitchell
Posted by theparttimewoodworker.blogspot.ca at 13:42 2 comments

In my quest to cut a better dovetail, I have started to focus on each aspect of the process to determine where I can improve, looking at both my performance with each, as well as the tool’s.

The one area that I see problems with is the cutting away of the waste. I have accepted the common suggestion that I use a coping saw to remove it, but the problem I have encountered is finding the proper saw.

Originally, I became enamored with a specific style of coping or fret saw that started when my wife bought one for me at the Christie Antique Show about five years ago. I found the design irresistible and to say I have picked up a few more of that same design would be an understatement. 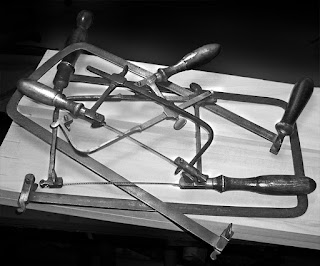 They are nice saws. They all hold their blade relatively taunt, and all have frames that have limited flex under stress. What none of them do, however, is allow for blade rotation. This means they are great for some projects, but not for cutting away dovetail waste in a wider board.

I then dug out the coping saw I have shuffled along with me for who knows how many years now. It is marked, “Great Neck No. 28”, and I probably bought it in the late 70’s, but I doubt I used it since completing the project I bought it for way back then. It allows the blade to be rotated 180˚, although not necessarily at an even rotation for both mounts. The frame, however, is quite stiff. Using it, because of the inability to fix the angle at either mount, I discovered the blade was twisting like crazy.

So the search was on for the perfect coping saw…ha! Good luck with that one. The reality is, if Chris Schwarz can’t find one, who can? He has been writing about his coping saw adventures for years.

His latest post on this subject is one where he road tests the new Knew Concepts Aluminum 5” Fret Saw. Putting my aversion to all things new aside, I went into his article with an open mind. Nice saw, but…

It isn’t the most attractive thing I have ever seen, but between the clamping mechanism and the stiff aluminum frame, I think it may be a winner. I’m still debating buying one as the thing is $95, which would mean about $130 landed here in Canada. It also limits the blade rotation to 45˚ in either direction. While this is better than the zero rotation my favorite saws provide, and the sloppy 180˚ rotation my hardware store special has, it is not the ideal rotation I would like, which would be 90˚. I also have a true dislike of all things red, and this saw is definitely that.

Figuring if I’m in for a nickel, I might as well be in for a pound, why not make my own.

Being a complete novice at this, I did my usual research and decided that the tried and true bow saw style of frame made the most sense. Because I have never even held one, let alone used one, I have no idea how they work or feel, but their design just makes sense to me. 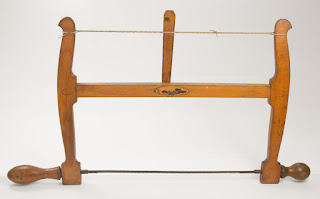 The big attraction to me is the double handles, as I believe they would facilitate cutting the waste away with a draw stroke, and then flipping the saw over and removing the little wing left with push strokes. What I don’t like is the traditional tensioning cord. To me, it looks like a fisherman’s nightmare when it comes time to change a blade, so I figured I would replace it on whatever I built with either a turnbuckle or a simple threaded rod.

As I had no focus whatsoever as yet on the clamping mechanism, I disassembled the Great Neck saw and scooped its parts. I also wasn’t going to spend any time creating the frame either, because this exercise was simply to find out if the basic design principle would work, so I used some Eco-Dowels I already had. Because I didn’t know if a turnbuckle or wing nuts at either end of a threaded rod would be best, a trip to Home Depot resulted in coming up with the parts that would allow me to test both within one set-up. The result of all of this isn’t going to win any beauty awards, but it did give me a huge amount of feedback regarding my thoughts on the subject. 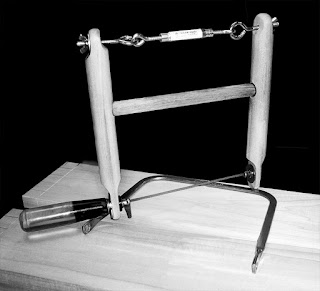 While crude and seriously ugly, this thing really works. It offers some serious control while allowing for quick cutting. It is light and reasonably robust. I was afraid that it would be top-heavy and therefore, prone to flopping from side to side but using it, I didn’t find that at all. The turnbuckle is out and the threading rod is in, but I do have to figure out a way to capture one end of it to speed up the tightening. It also definitely needs a second handle, but I am not too sure the traditional style of them is the one to go with.

So “Prototype Saw One” is a winner and it is time to start the fine-tuning.