Now That's Something I Would Have Done...

I woke up one day with a thing for Stanley 40's. I have no idea where it came from, but I suspect it has to do with nothing more than the shape of their handles. Ever the masochist, I started collecting them individually, instead of simply looking for a good, clean set from the get-go. After assembling almost a complete set, I realized they were not matching. I then decided that the ever-so slight difference in the older version's handles was sexier, so off I went in search of examples with four patent dates. I have one or two left to find, but after four or five years of searching, I'm pretty happy with what I have accomplished.
In truth, though, I have actually over accomplished with this particular collection. I will admit to being a real sucker for these chisels and I will buy up any and all that appear to be a decent length. To ever remind me of this obsession, I have a drawer full of the damned things, many of which I plan to sell in the near future. I doubt getting rid of many will stop me from buying more, though, as my plan of attack now is to complete the set, but times two; one good set for easy chiselling, and one "beater" set.
During one of my many searches through eBay, I came across a 40 that looked like it could have come out of my old man's toolbox. This poor old thing took a real wailing from someone, and I would lay odds it was probably a little schmuck of a kid who probably even looked like me. I felt so sorry for this thing, I bought it for about 25 bucks more than it was worth, which means I paid $20 for it. 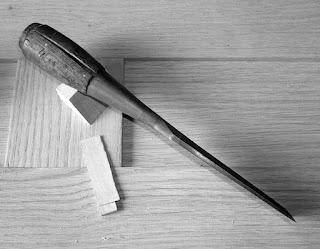 It has sat in the drawer for a while now, but this weekend I decided to bring the sad little thing back to life. That rotten little kid had nailed this thing to death, wailing on it so bad that the cap was flattened and mushroomed over the leather washer. While driving the cap down, the wood handle could do nothing but follow suit and eventually the kid had it mushroomed over the shank so badly, it had no choice but to split. 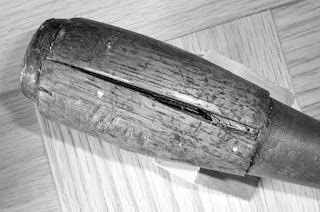 I straightened out the opening as best I could with a chisel, then cut a wedge from some scrap ash, running it over a sheet of sandpaper until I got it to fit as snugly as I could. I filled the gap with glue and hammered the wedge in as far as it would go. 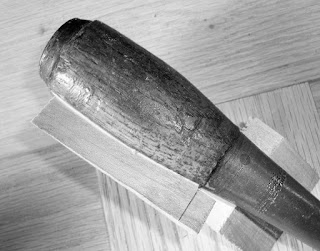 I let it sit for 24 hours, then chiseled away the waste. I couldn't figure out how to bring the handle back into line any other way but to chisel and sand away the mushroomed areas, both at the cap and at the shank. I reshaped the handle to as close to original as I could get it. I then filed the cap down smooth on the sides and revealed as much of the leather as dared. I then gave it eight or nine coats of shellac, rubbing it down with fine steel wool between coats and then four or five coats of Min-Wax Finishing Wax, each coat rubbed in with extra-fine steel wool. 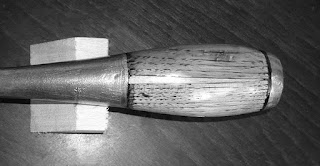 The patch is not a perfect match, but then I don't want it to be. Having been wailed on is part of its history now, and that light wedge-shaped patch will put a smile on my face every time I look at it. It is nice to know I wasn't the first rotten little bugger the world has seen, and I doubt I'll be the last.
Here is the end result above an untouched example so the handles can be compared. 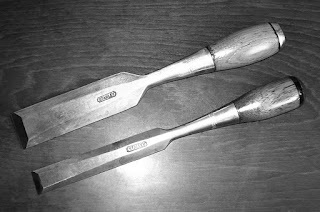 I know I didn't put any value back into this chisel, but I think I gave it back a little of its beauty.
Peace,
Mitchell
Posted by theparttimewoodworker.blogspot.ca at 03:47