I'm a few days late getting this article posted but as my old man used to say when he was in the same pickle, "Better late than never".


This article is about how I ended up correcting a 70-year old mistake on my uncle's army service records. I put it together for publication in our local newspaper as an interest piece for their Remembrance Day edition. While they rewrote it, which is fine, it made my day to see his story get out in front of the public. There are so many men in all our histories who died believing they were doing what was right. Sadly, while we have all benefited from their ultimate sacrifice, most are diminished to a vague memory that is conjured up on the 11th hour of the 11th day of the 11th month every year. We owe them far more than that.

The following article is about a local boy who never came home from the war and how his nephew, who he never met, corrected a mistake in his records 70-years after it was made.

William James Andrew Mitchell was born on October 4, 1916 in Peterborough, but at the time he enlisted in the Canadian Army, his had moved to the newly created corner of Ivan Road and Meadowvale Gardens in Highland Creek. The family lived in a small cottage his father had built on a double lot just after their purchase in the spring of 1934. Because of the size of the property, the family was able to augment their income by everyone pitching in to raise chickens and grow fruits and vegetables. Billy, as his father called him, had graduated that same year with a motor mechanics certificate and that fall he started working as a mechanic at Leno’s Garage, the only auto repair shop in the village.

Billy's father, William, or Will as he was known in the family, had firsthand experience in war, having served with distinction during WWI in France. Even though he had returned to active duty in 1940 as an instructor at #20 Basic Training Camp in Brampton, he didn't want his oldest son to have to witness what he did (by the end of the war, the senior Mitchell held the rank of Company Sergeant Major and was the camp's administrator). Against his father's wishes, Billy finally enlisted in the Canadian Army on July 16, 1941.

Billy spent the first 17-months of his service being kicked around Canada and then spent another 19-months doing the same in England. Over those 3-years, he was transferred 20 times, a result of him being shipped wherever and whenever his skills as a motor mechanic were needed. During that time he participate in numerous Driver and Motor Mechanic training courses, eventually earning the army’s highest trade classification for both, as well as their accompanying pay hikes. When his nephew reviewed his service record for the first time, he noticed that his uncle had also participated in an unusually high number of courses in Rifle Training, Bren Gun Training and Combat Techniques, far more than his nephew had seen in the other service records he had reviewed. When Billy finally arrived at the front in France on July 3, 1944, he was a well-trained motor mechanic with a high level of combat skills. The unit he was attached to, however, saw him differently.

Billy had been transferred to The South Saskatchewan Regiment (SSR), a regiment that had the sad distinction of having one of the highest attrition rates in the Canadian military. The SSR were part of the 2nd Canadian Infantry Division who were prominent in the allies' actions to push the enemy westward. To them, Billy was what they needed most; a highly trained soldier who could, in a pinch, fix any vehicle they might have a problem with. In other words, Billy, who was then a few months shy of his 28 birthday, was suddenly “regular army”.

Within a month of joining the SSR, Billy had been promoted to Acting Lance Corporal. The day after that promotion, he also earned himself a Military Medal. The Military Medal Citation states that while on patrol, Billy came across another SSR patrol that was pinned down by an enemy machine gun nest. Realizing the precarious position the other patrol was in, his first action was to divert the enemy’s fire away from the pinned patrol and onto himself, getting himself wounded in the process. Wound or not, he then went “forward toward the machine gun post and, firing his weapon from the hip, destroyed the post”. The weapon Billy was doing his James Cagney impersonation with was a Bren Gun, a 10.5kg (23lb) gas operated machine gun that spewed 600 to 800 rounds per minute and is believed to be Billy's weapon of choice.

Ten days later, Billy was promoted to Acting Lance Sergeant and six days after that, Billy was “killed in action”. He was still two days shy of his 28th birthday.

Billy's parents were devastated by his death. Because Billy didn't want his mother to worry, he never told his parents he was in the thick of it as "regular army". As far as his parents knew, Billy was behind the line doing what they thought he did best; fixing machinery. Because he wasn't a commissioned officer, there was no record regarding the circumstances of his death so they didn't have a clue what happened to him. Thankfully, once the war was over, one of Billy's mates came to their rescue.

Joseph Potash was an American citizen living in New Jersey when the war broke out and he wasn’t pleased that the United States didn't declare war on Germany right away. His answer to this was to head north and sign up with the Canadian Army. He and Billy had met originally in England during Billy’s brief attachment to Joe's unit, the 2nd Heavy Anti Aircraft Artillery Regiment, Royal Canadian Artillery. Although Billy was soon transferred out of the 2nd, they never lost touch with each other. Both were finally transferred to the front within days of each other and once in the thick of it, they saw each other often as the 2nd Heavy Anti Aircraft Artillery Regiment was the outfit that gave The South Saskatchewan Regiment their artillery support.

Not long after the war was over, Joe bundled his young family into the car and they headed north to visit with Billy's parents. During their first meeting he related to them what he had been told about how Billy died. As an Acting Lance Sergeant, Billy was leading multiple reconnaissance patrols on a daily basis. On the evening of October 3, 1944, he lead a patrol of 12 men out to look for enemy patrols, stragglers and snipers in and around their location at Camp de Brasschaet, Belgium. Upon returning to their line, it was discovered that they were one man short. After Billy had submitted his patrol report, he asked for and received permission to retrace the patrol's course alone to see if he could locate his missing man. While doing so, Billy mistakenly entered an area that hadn’t previously been swept and stepped on a land mine. On October 4, 1944, a patrol found his body, an unnecessary death as that same morning, the missing man found his line.

When Billy's nephew viewed his records for the first time, he realized his uncle wasn't getting the recognition he deserved. Every database his nephew had accessed to find information about Billy had his rank listed as “Lance Corporal”, yet the last two entries on his service records stated differently. The second last entry in his uncle's service records listed his promotion to Acting Lance Sergeant and the last one stated, “Killed in action”. There was no entry that demoted his uncle back to Lance Corporal and because of the army's unwritten rule that a soldier retains the rank he held at the time of his death, his nephew knew that the rank his uncle had been remembered with over the last 70-years was just...wrong.

The issue of the incorrect rank bothered Billy's nephew for a few reasons.

Then there was the reality of what an "Acting" promotion really is. While there are a few reasons why a soldier would be given an "Acting" promotion rather than a full one, the most common reason was to use it to test a man’s moxie, to see what he is made of and whether or not he can handle the responsibilities of the rank. When Billy got that last promotion, he wasn't handed the two extra chevrons for his sleeve that denoted his new rank, nor did he get the higher pay rate and the few other minor benefits that came with it. What he got was the responsibilities of the rank and nothing more.

When Billy's nephew put together everything he had discovered he quickly realized that Billy was killed in action because he chose to fulfill the responsibilities of his temporary rank to the best of his abilities, yet for the past 70-years, he wasn't being remembered with the rank that gave him those responsibilities in the first place.

The definition of an "Acting" promotion also explained why Billy's rank was incorrect. When his body was recovered, Billy was still wearing the rank insignia of Lance Corporal, a single chevron. Given that the soldiers who had the gruesome task of collected the war dead weren't the ones who fought beside Billy, they wouldn't have known about his new "Acting" rank, so they used the rank they saw when recording his death. What surprised Billy's nephew most is that his grandfather didn't spot this mistake and fix it then.

Armed with what he knew, Billy's nephew wrote the Department of Veteran Affairs, the Commonwealth War Graves Commission, Library and Archives Canada and a few other departments explaining the mistake he had discovered and why he felt it should be corrected. They all replied within months and before long the databases’ listings started to change, displaying Billy’s rightful rank. The Commonwealth War Graves Commission even went one step further by first having Billy’s gravestone inspected to see if the correction in rank could be done on it and finding that impossible, they committed to installing a duplicate gravestone, but one with the correct rank as soon as possible.

So as it stands now, from this time onward, Billy will be remembered as Acting Lance Sergeant William James Andrew Mitchell MM. If those who come across his listing take the time to understand what the information offered about him represents, they will gain a good understanding of who this man was and what he stood for.


This is the newspaper's version of the story... 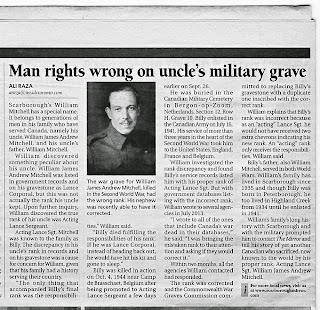