Is that a big plane you have there, or are you just glad to see me...

In my never ending quest to spend my son's entire inheritance, one of my latest additions to the collection is a Stanley No.8 Type 8.

It is funny how you learn things in this collecting game.
I got an email from Jim Bode of jimbodetools.com saying;
hey mitchell,
picked up an awesome no.8 type 8. it is near perfect with very light pitting on the right side any a tiny check on the front knob. q logo iron has an inch to the slot. japanning is glossy and 97%. all original parts. 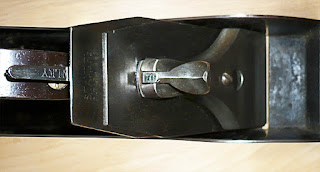 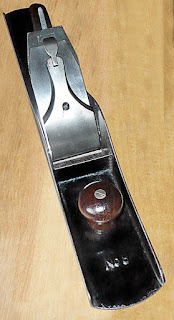 I bought it simply because Jim told me to, (there's trust for you, eh?) but not before replying; "Ok, what the hell is a "q logo iron" and what do you mean, "has an inch to the slot"? The rest I understood.
So Jim patiently replied to my queries and my knowledge of all things Stanley grew a tad more.
A "Q Logo" iron is one stamped with the 1892 patent date. How you get a Q out of 1892 I'll never know.
As it turns out, "An inch to the slot" is a little easier to comprehend. What Jim meant was, the distance between the slot that is cut into the blade so it will travel on the cap iron screw and the working end of the blade is one inch, meaning I can hone away that much material before the blade is garbage.

Once that was explained, another question popped into my head:
How many times do you have to sharpen a plane blade to wear away 2 1/2" of steel?
Peace,
Mitchell
Posted by theparttimewoodworker.blogspot.ca at 06:52 1 comments

As my old man used to say, "Gotca', ya bugger!"
Those words usually meant I was in for it, but not this time. This time, its a good thing.
After over ten months of endless solid main gears, I finally found one... 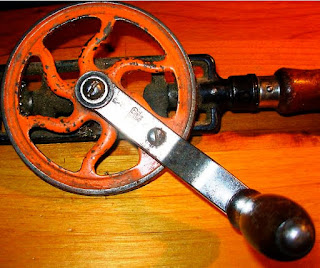 Just about every day for ten months found me doing searches for a Stanley 624 drill on eBay, jimbodetools.com, thebestthings.com and every other site I have bookmarked. Just about every day for ten months all I found were solid main gear examples which were far too new for my collection.
Finally, one stared me in the face. I was so used to not finding one that I continued on before the nickel dropped that I had just seen what I had been looking for. I actually had to backtrack to bring it up.
With most of its original paint intact, nothing broken and not even really dirty, from my perspective, it is a fairly decent example of what I consider to be a relatively rare tool. There may be a number of them out there, but they are definitely not for sale. I have no idea how old it is or what it is worth, other than what I paid for it, but to me, its worth at least ten months of work.

I figured when I finally found one, it wouldn't come cheap as, after all, when demand outstrips supply, the price rises. As I got this one for 17 bucks and I was the only bidder, I figure the demand in all the world for one of these was yours truly, so that wiped out the demand/supply theory.

It is missing its side handle, but it just so happens I have one. Not mentioned in the listing were the three original bits that were stashed in the handle. The cap was turned on pretty tight so I doubt the seller even knew they were there. I'll get in touch with Jim soon to see if he can come up with the complete set for me.
In truth, when I opened the box and held it in my greedy little hands, I quickly realized why there are not many of these old eggbeaters around. I had read somewhere that the spoke gear was pretty fragile, compared to the Miller Falls and Goodall/Pratt. So fragile, in fact, that most were broken. They were not kidding. This was not one of Stanley's better designs.
When I get this one cleaned up and I get the Miller Falls back from wktools.com where Mr. Kuc is working his magic on it, I'll shoot some photos so you can see the difference. There is some serious metal missing from this Stanley. 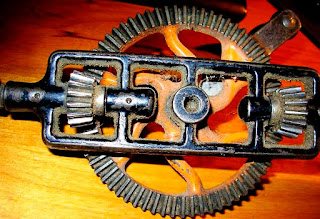 That's ok, though. I like rooting for the underdog, literally.
Peace,
Mitchell
Posted by theparttimewoodworker.blogspot.ca at 06:45 5 comments
Newer Posts Older Posts Home
Subscribe to: Posts (Atom)