Tried To Get My Feet Wet And Drowned...

I recently tried to run with the big boys. Scary stuff!
If you cruise the web looking for information on vintage tools you have probably come across David Stanley Auctions. It is probably one of the premiere auction sites for vintage tools out there. The tools they consign for auction are notably far and above the average. Their recent auction included both private and museum collections which meant some pretty amazing stuff. I got hooked on this company and signed up for a years worth of their catalogues.
Their last auction was held on March 26th and on the 24th I received their catalogue in the mail. Thinking, "In for a penny, in for a pound" (little did I know), I figured I would give them a go. Not knowing how all this worked, I picked three lesser valued items to start; a 5" Brass Protractor, a Marples 15" Square and a Pair of Dowel Rounders.
The Protractor was listed as, "A 5" combination brass protractor and scale rule G++ (30-50)". The image supplied in both their printed and online catalogues showed a nice looking example so I listed my maximum bid on their Absentee Bidding Form as 50₤. It sold for 60₤.
The Square was listed as, "A 15" brass faced rosewood handled try square by Marples with bench stop G+ (15-25)". Knowing that their grading system was as high or higher than those The Best Things uses, I felt confident placing a bid for it at 30₤. It sold for 32₤.
Finally, the Dowel Rounders were listed as, "A pair of handled beech dowel rounders G++ (30-50)". I placed a top bid of 50₤, which is exactly what they sold for.
Here is what my single winning bid got me... 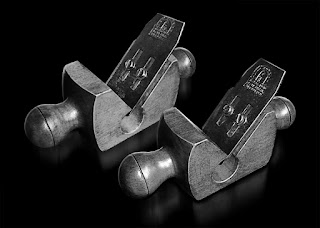 They are really a nice pair of cutters which look as though they didn't cut very many dowels over their lifetime. They are stamped with a previous owners name, "J. Harvey". They also have size stampings; one stamped "8" (¾") and the other "9" (1"). The "MES Howarth, Warrant Cast Steel, Sheffield" blades are probably very close to their original length, based on the very little amount of play below the mounting screws when the blade is set. As a result of all of this, I have no complaints about the tools purchased.
Now lets have a look-see what these tools actually cost me.
The invoice I received had the listed lot and selling price of 50₤.
There was then the "Premium", which I expected, of 7.50₤
Following this was a Credit Card charge of 1.98₤. I didn't see this one coming.
Then the shipping charges were added, the 17.58₤ charge being one thing, but added to that is a VAT charge of 3.52₤.
Insurance was additional, which was 0.50₤, and again the VAT charge reared its ugly head to ding me for another 0.10₤.
Now I'm not blaming David Stanley Auctions in any way for these charges. Other than the Credit Card charge, I was well aware of them before placing my bids. In actual fact, David Stanley Auctions didn't charge me the 3₤ handling charge they were supposed to, according to their literature, so they treated me more than fair.
All told, though, my 50₤ ($78.50 CAN) bid for these two Dowel Cutters ended up costing me 81.18₤ ($128.00 CAN), which means landing the tools on my desk cost more than 60% of their purchase price.
I should have expected this. When I was in London, England a few years ago, my first purchase was from a chip vendor on the street, and was just a can of Coke. When he asked me for 5₤, I didn't think twice, and just handed it to him. As I popped the tab on that can walking away, though, it hit me that I was about to drink an $11 can of pop.
England. You have to love it, but I guess only the big boys can afford to live there.
Peace,
Mitchell

As an aside, I will mention that while David Stanley Auctions is a spectacular company that deals in better than the best in vintage wares, they are a tad lacking when it comes to communications. Two emails that I have sent them asking for clarifications have been left hanging. As an international company dealing on the Internet, I was quite surprised at this revelation.
Posted by theparttimewoodworker.blogspot.ca at 10:44