What'ca Doin' With That Tree, Mister...

A neighbour of mine was having a couple of trees cut down in her backyard and I asked her, without thinking, for a 3' hunk of the trunks from each.

The arborists came, started cutting, then called me over to choose the trunk runs I wanted, like I knew where the best wood would be. With their help, ok, with their decision, I left and they completed felling the trees. The next day I looked over the fence and there were two 3' long hunks of trunk; one from a dead ash tree and the other from an almost dead elm.

Problem Number One: How to get these suckers home.

I went to http://www.woodweb.com/cgi-bin/calculators/calc.pl?calculator=log_weight, and using their Log Weight Calculator, I determined that the 20" in diameter ash log weighed 407 pounds (184.6kg), and the 19" in diameter elm log weighed 297 pounds (134.7kg). Picking them up and carrying them home wasn't going to happen.

First, I tried to put the elm log on one of those convertible carts; the ones that can be converted from a two wheeled cart to a 4 wheeled one and back again, but it got bent up pretty quick. My neighbour came to my rescue again and offered to borrow her cousin's fridge-cart for me to use. I was back at it the next day and using the borrowed fridge-cart, I got both logs home without much difficulty.

Problem Number Two: How to cut the things up into planks.

I searched the web for locals who commercially milled logs using portable mills. The two quotes I got were $800 and $1200, both understandable (I guess), and both ridiculous, given the amount of lumber I was going to get out of them.

Next, it was pricing out a chainsaw and milling attachment. To make the purchase worth while, I was going to have to buy a chainsaw that I could use to harvest more lumber from felled trees in the neighbourhood. That meant a 28" or 30" chain and bar was needed, so I first searched for a used machine, which I couldn't find, then priced out new stuff. The milling attachment was cheap at $79, but the chainsaw, not so much. A 28" saw was around $1200 and a 30" around $1300. It then dawned on me that doing this again with other felled trees wasn't going to work...see "Problem Number One".

I then said the hell with it and went off to rent one. For some reason, chainsaws aren't widely stocked by rental companies. It took me two weeks of "dropping by" the local Home Depots to see if they had one available, all because they do not reserve tools for rent. Finally, I got one, the longest I was able to get; a 20-incher.

I started with the elm log and quickly realized that, despite what my wife has told me in the past, size really does matter. The saw was neither long enough or powerful enough to cut through the 19" in one swipe.

I thought about it for a while and decided to just go for it. I realized that, without some sort of guide, making multiple cuts that were aligned with each other wasn't going to happen, so I went from wanting to cut 1¾" to 2" slabs to cutting them 3" to 4" thick. I ran the saw down one side, cutting half way through, then ran it again down the opposite side while trying desperately to align it with the first cut. I can dream, can't I? Once I got the second cut done, I wasn't surprised to discover that I had to do a third, adjustment cut, one that tied the two cuts together. It was a real struggle, but I finally got the elm log cut up into about 6 slabs in widths close to what I wanted, 4 of which were usable. I attacked the ash log and quickly realized why it weighed so much more than the elm. Man, was it hard stuff. It took forever to get through it, but eventually, I ended up with another 4 usable slabs. 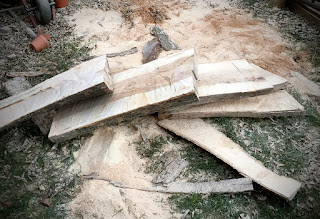 I cut a bunch of construction grade 2"x2" to length and used them as sticks to stack the slabs, then covered the pile with slabs that I figure I won't be using. 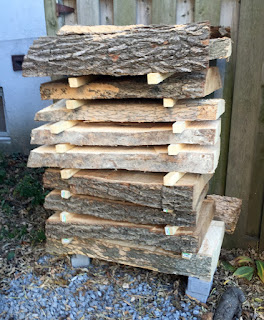 All the slabs range from 3" to 4" in thickness, but by the time I plane them straight and flat, they will be around 1½". I am sure there is an electric planer in my future.

I do not know what I'm going to use the elm for, but I will be using the ash to make my butcher block workbench top a little wider. Because the ash was dead, I think it will be dry enough to use next fall,  but the elm will probably take a few years to dry out properly.

Would I do this again...never.

It is way too much work for the amount of wood I got out of them and way too expensive to increase that yield. I have read about a woodworking club in the states that owns a WoodMiser that they use to mill fallen and felled trees, but the woodworking clubs in my area are not involved with this and have no plans to start. The biggest issue, though, is "Problem One", hauling the uncut logs around. For that, I would have to buy a truck, and my wife ain't the truckin' type of gal.