Two Chairs Walked Into A Bar...

A few years ago, travelling through one of the better neighbourhoods of Toronto, I came across a couple of teak patio arm chairs sitting on top of a pile of garbage at the side of the road. A short while later, they were sitting in my backyard. I scooped them up for a couple of reasons. First, their design was one I have admired for years, but couldn't rationalize the expense. Back in the early 80's, when I first discovered this style of chair, they ran about $500 a pop. Also, I have an affinity for teak, so I just couldn't see these two chairs end up as landfill.

This is one of the chairs as it was when it arrived home...

Teak has dropped a bit in price over the years, mainly because a lot of the teak on the market today isn't really teak at all. Their are a few species of wood that share some of the same properties as teak, so they have taken over much of the market because true teak, often called "Burmese Teak", is environmentally protected. If the Teak you buy today is truly Teak, you can pretty much count on it originating from a Teak Plantation located in either Indonesia or India. There isn't really anything wrong with plantation grown Teak as far as its properties go as they are about the same as old-growth Teak, but it doesn't have the same grain structure or colour.

My affinity for Teak came about while I was rebuilding my 1968 40' cruiser back in the early 90's. The boat came out of the factory with plywood decks coated with fibreglass, all painted white and I hated them. I wanted something a little more "nautical" looking so I went with Burmese Teak, which sold for $35 a board foot back then. Between the ⅜" thick Teak deck boards, the 1" thick covering boards and the caulking to fill them all in-between, I think the upgrade cost me about $3-grand, but it was worth every penny.


If you live in the sunny south, you can leave the Teak unfinished and it will turn a beautiful light silver colour and the only touch-up required is regular wash-downs with salt water. Here in Ontario, we have humid summers and damned cold winters, buckets full of acid rain and a lack of salt water for washing, so our unfinished Teak turns a rather unattractive blah-grey. To put some life in your Teak, you can use specially developed coatings, such as Cetol, or use standard Spar Varnish, or, G_d forbid, Teak Oil. At first, I went the Teak Oil route, not knowing any better. It was a huge amount of work for a very short return. To apply Teak Oil properly, you have to brush on multiple coats, sanding each coat into the grain using progressively finer grits of sandpaper with each one. The excess oil and wood dust is also a royal mess to clean up between each coat. It took a week to oil my decks and when they were done, they were bloody gorgeous, but they turned right shabby-looking within a couple of months and I couldn't face doing them again so soon. I then stripped out the oil with solvents and went at them with varnish. After about four months, there was a number of areas that were showing the varnish lifting, especially in the corners and while I could have repaired it, it would take a week to do, as, with Spar Varnish, you can only lay down one coat a day. Finally, I settled on the Cetol, using the matte for the decks and the gloss for the covering boards. I had to redo them every spring and fall, but that involved only a quick sand and re-coating, a one day job. (Just a note here on the gloss finish Cetol. To get good results, you need to lay down a couple of coats of matte, then a few coats of gloss. No matte - no gloss.)

Ok, back to the chairs.

There were two things wrong with these chairs. The first was that the original finish hadn't been touched since they left the factory, and it was totally gone. I didn't like the blah-grey it was wearing so a full sanding was in order. It also had an original design flaw. The design had a metal bar running through all the slats in the back and seat with its ends running in a track routed into each rear leg. This was to allow the chair to fold. The problem was, there was nothing to hold the legs together at the required distance and as a result, the bar wouldn't stay in its routed tracks. When you sat in the chair, it would rather unceremoniously collapse.

To start, I drilled out all of the "pins" that helped hold all the parts together and broke the chair down to its 37 pieces. I then scraped what I could with a card scraper and sanded the rest. I didn't want to try and go down to completely fresh faces, but just enough to give a clean display of the wood's grain, but retain some of its patina and bruises.
Once I had the Teak cleaned up, I then wiped each piece down with acetone to remove any surface oil so the coating would stand a better chance of adhering. I used Spar Varathane for this job, although Spar Varnish would probably do just as well. "Spar" means that the product doesn't dry to the brittle coating that regular varnish or varathane becomes, allowing it to expand and contract with the wood in its outdoor environment. For the first four coats, I used a 50/50 mixture of varathane and thinner. This watery mixture has a better chance of soaking into the grain more, giving the finish coats a "tooth" to hang on to. Because of the heavy presence of thinner, each coat dried quite quickly and didn't require sanding before the next coat was applied, meaning I was able to apply two coats each day. Once a sheen started to show, I knew I needed to start sanding between each coat and thickening up the mixture. The fifth coat was mixed to 75% varathane and 25% thinner and the seventh and eighth coats went on right out of the can.

Once all the pieces had eight coats on each, I sanded all the frame parts so they would be ready to receive a final coat once the chair was together and started assembly. I then widened the bar's track in each rear leg. The mortise and tenon joints were epoxied and pinned, using ¼" maple dowel.

I assembled the chair and turned my attention to the new plates I wanted to make for the bar. I purchased 2' of 3/16th brass plate which I cut into two plates. A duplicate of the rear legs' original slots was cut into each plate. I then drilled each for screws and countersunk the holes.

The back and seat slats are interwove, so once I had them together I was able to measure their overall width. I cut the bar to a length that was 1" longer than the slats total width and drilled a small hole in each end to accept a cotter pin. With the bar passed through all the slats, I placed a plate over each end, then a flat washer, then held the whole thing together with a cotter pin at each end. Each plate was then screwed to the appropriate rear leg. This, I figured, would not only support the slats, but would hold the legs together at the required width and the washers and cotter pins would keep the bar ends running in the slots, allowing the chair to fold without the bar popping out.

I folded up the chair and discovered it didn't work. Damn!

What I had failed to allow for was the amount of wood that was removed from each slat. Surprisingly, over the 27 slats it totalled just over an inch. By cutting the bar as much as I had, the set-up was pulling the legs together at the top, so the chair sat perfectly when opened, but when I tried to close it, the spreaders at the bottom of the legs held the legs apart 1" wider than the bar. Forcing it to close caused one of the washers to fold up around the bar and that end popped out of the track. All of this, however, told me I was on the right track and that the plates would work.

I bought a new bar, but a threaded one, along with a bunch of jam-nuts and washers. Once I had this bar in place, I centred it, then put a washer at each end and a pair of jam-nuts to hold the slats tightly together. The plates were then added, then another washer and two more jam-nuts at each end, these to hold the legs together at the same width as the spreader and to keep the bar in the slot. Folding the chair up this time worked perfectly.

This is the end result, a very nice looking chair that doesn't collapse when you sit in it. 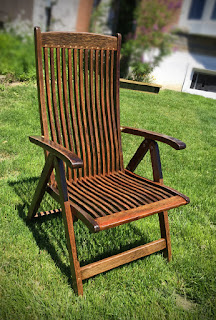 I still have the second chair to do, as well as turn a Teak coffee table I just found into two footstools. I think this work can hold off until next summer. You don't want to rush these things, you know.