Last spring, while out walking the dog, I came across a real find sitting at the side of the road waiting for the garbage truck to haul it away. It was a small workbench made in the 1950's, with a vise attached and all. It was a tad rough, but beggars can't be choosers, so I carried it home. The dog was no damn help at all with this, by the way.

While carrying it home, I took a break at the halfway point and used my phone to take this... 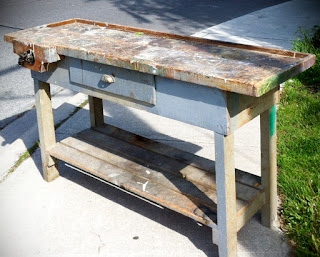 Ok, a Moxon it isn't, but I thought it was just the ticket as my outdoor workbench. I had to stiffen it up a bit, which I did using pressure treated lumber left over from when I built our deck. I was still pretty light, so I screwed it down to the deck's floor. It wasn't perfect, but it was usable.

I also had to rebuild the vise. The screw was fine, but the round wood guides had pretty much worn away. I replaced the guides with 1" hard maple dowels, but not long after I had a devil of a time getting the thing to open. It had rained and the dowels had swelled. I finally got the thing apart and replaced the dowels with copper pipe, which, of course, never swelled. The problem was, the pipe was a hair smaller in diameter than the dowels they replaced, so the vise acted sloppy from that day on. I also moved the vise to the right end of the bench and back again - twice. I couldn't figure out which setup I liked better.

The other problem I had with it was the top's overhang. There was a full 10" of overhang on both ends, so I couldn't use them. As soon as I started wailing away on anything close to the ends of the top, the material would bounce around like crazy.

So I have started to modify the old girl... 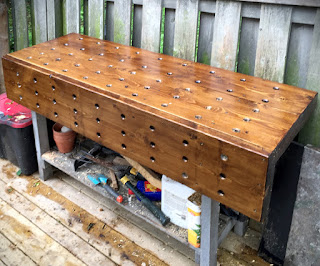 I used 2" x 10" construction grade lumber for the new top, which means it is either Fir, Pine or Spruce. I cut everything to length and then applied Thompson Water Sealer to all the hidden surfaces. With a bead of construction adhesive on the mating surfaces, I screwed down the first layer using 2½" screws. I then gave all their top faces a second coat of Thompson. When that had dried, I laid down a second layer of timber, also using construction adhesive, but this time using 3½" screws. Once things were set, I laid out the holes along the length of the top and face, putting a dog-hole every 6". Because I staggered the joints in the different layers, I couldn't space the rows out evenly, but I did get five rows in the top and three in the front.

With the dog-holes drilled, I went ahead and flattened the top...


Once I had the top flat, I chamfered all the holes using an 82° countersink bit that I got from Lee Valley. I can't praise this bit enough as it refuses to bounce or produce tear-out. Brilliant for a countersink bit chucked into a hand drill.

Originally, I planed to just use more Thompson Water Sealer on the top, but that would be too easy and wouldn't look as nice. Instead I mixed up a 50/50 mixture of Spar Varathane and thinners, then tossed in a couple of shots of dark walnut stain. I applied four coats of this, letting the wood soak up every drop, then I gave it four more coats of clear Spar Varathane as it came out of the can.

I had a hell of a time trying to coat the insides of each dog-hole, and failed miserably. The first time I tried the bench out I had a hell of a time getting the hold-down to drop into the holes as they were all swollen. I have an idea how I can correct this. I'm going to re-drill each hole, and before I move on to the next one, I'm going to run through a 1" spiral cleaning brush that has been soaking in the wood sealer. I'll give it a couple of coats and that should limit the amount of swelling, or at least I hope so.

My next attack on this bench is to add a serious set of legs to the right end of it using some railway tie timber I salvaged. It should add some serious weight to this bench and once in, I'll be able to use it to hold a leg vise that I plan to cobble together.