Unlike My Wife—I’m Running Out Of Things To Buy…

The problem with tool collection is that it doesn't stay constant.

Over the last four or five years I have been searching out tools that I wanted, nothing fancy, just the normal stuff that you would find in a cabinet shop around 1900. Because of the availability of these things, they were easy to find, so I was buying one or two pieces a month. That ain’t happening anymore.

At first, the hobby is not only easy, but it is damned cheap. A trip through the “Collectables > Tools & Hardware > Tools > Carpentry/ Woodworking” category on eBay can see you scoring one little item or another on an almost daily basis, if you, your wife or your bank manager let you. There are so many little bits and pieces made to do specific processes in woodworking; you could go nuts collecting them all.

Eventually, though, you locate, buy, receive, clean, sharpen and polish about all the little guys you think you will ever need, and then some, so you start looking for the more expensive, larger items.

The larger items aren’t as readily available as the little guys. There are a lot of listings, but most are junk and not worth the shipping costs, so your purchases tend to slow down rather quickly. While I restrict my choices to a narrow timeframe, from 1880 to 1910, while not an everyday event, it is not that difficult to come up with excellent examples. When I say “excellent”, I mean examples that I won’t mind using. I shoot for the high end of the “User” category. With these, I don’t feel my neck when I have to sharpen a blade, shortening it up in the process, or see a scuff show up on the tote or something.

My Stanley plane collection, at this point, is missing an No.1, which I doubt I will buy—ever, a No.6, which I am looking for now, and a No.9, which I’m still up in the air about as I think buying one and using it would seriously make me nervous. From what I have seen available, these things are pretty vulnerable to damage. 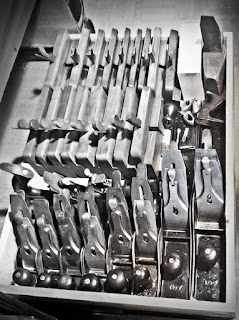 I now have two complete sets of Stanley No.40 chisels; one for fine work and one for wailing on. I still look for better examples of the four patent dates, but if I don’t find any, it is no big deal.

I have more saws than I have room to store, so while I am still searching out a pair of excellent dovetails, I spend more time trying to figure out which maker to shoot for than I do looking for the damned saws. While I spent about a year and a half finding a matched pair of Jackson 12” saws, I have now come to realize they are a tad thick for cutting dovetails, and while they work, and work well, thinner blades would be better. As Disston made the Jackson blade in the same thickness as their own brand, buying a pair of old Disstons would be a waste of money. I would like to buy a pair of Two Lawyer saws, but at over 700-bucks for the pair, I would dust them, but I bloody well wouldn’t use them.

The only thing that seems to keep me going with this is my quest for more examples of H. E. Mitchell’s tools. I had an opportunity to buy an ultimate brace of his about eight months ago when The Tool Bazaar had one listed, but I felt he was charging way too much for it at 195₤. Since then, I have been royally kicking myself in the ass, to the point that I emailed Andy last month and asked if he would broker a deal between the guy who bought it and myself, but he declined. While I still search daily for Mitchell examples, it is pretty rare that one turns up, so even this quest has lost the luster it once held.

When I do score, though, it is like 27 Christmas’ and 42 birthdays all rolled into one, and score I did just a few weeks ago.

I have a saved search on eBay for anything listed in the tool collectable section that has the name “Mitchell”. I get emails from eBay regarding this search about twice a week. Rarely do they include the tools I am looking for, but on this particular day, I scored, and scored big. 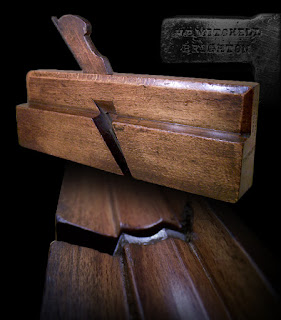 Mateusz1979 had a ½” Ovolo plane by Mitchell up for sale. I immediately emailed him and asked if he had a “Buy it Now” price. We went back and forth a bit, feeling each other out, and eventually he emailed me a price that was beyond being fair—it was incredible. I quickly agreed, paid the bill, and a week later the plane arrived.

The plane is probably one of the better examples that I have of cousin Henry’s. I don’t know if Mateusz bought it as clean as it was, or he spent some time on it to clean it up himself, but either way, it didn’t need the coat of wax I gave it upon receiving it. 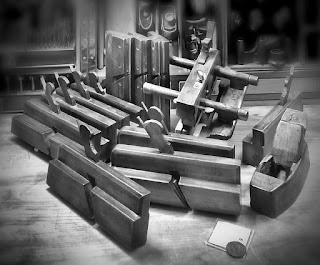 On top of that, the plane is a perfect addition to the set. I picked up a 5/8” Ovolo off of eBay a couple of years ago; a number two. Last year, Hyperkitten.com had a 5/8” Ovolo Number one that I was able to grab. This one is a ½” number two, the finishing plane, so if fits into the set well.

As the buzzes come less frequently now, when you get one, you savor it longer. As scoring a Mitchell plane has always given me the biggest buzz, the image above shows you what has been sitting on my bench since the day this last one arrived. I pulled everyone one of them from the drawer, brought the plow down from the shelf, and even added the counterstamp coin to the display and each time I walk in the room, I have a look and enjoy a smile. The collection is growing—its slow—but its growing.

Mitchell
Posted by theparttimewoodworker.blogspot.ca at 11:38