As you grow older, you start to leave a trail of vices behind you. It is so unfair that they are wasted on youth. As I have been married longer than five minutes and am approaching retirement age, damned if I don't have any of them left. As Valdy, a folk song writer and poet from my youth now says...


Now I'm old and tired, bent and busted,
Gray and wrinkled and I can't be trusted,
I'm just a dirty old man.


A while ago, I started to look around for a new vice. I don't enjoy gambling, so that one is out. As a kid, I absorbed so much alcohol that now I can't stand the taste of it, so that one is out too. Hell, I can't even drink beer because I have an allergy to hops. Go figure. Surprisingly, though, I do think I found one today.

Martin J. Donnelly Antique Tools sends out a short list of offerings for his upcoming auctions twice a week in emails and I pour over every one I get. Their next auction is next month in Indianapolis, Indiana, and it appears they have a number of dynamite items for this one. I have been forced to dig the ol' credit card out a few times to place absentee bids for a few of the items coming up.

While I fell for one item they had listed in today's email, it is not something I would like to buy. Instead, I would prefer to make my own.

What grabbed me today was a great looking vice (see, I eventually tie my ramblings into a discussion of tools). It is from the Colonial Williamsburg Collection that the Live Free or Die Auctioneer is selling in the Indianapolis sale. It was made by a man named Arthur W. Hall of Lakewood, Ohio in 1925 and I think it is one hell of a pretty interesting vice... 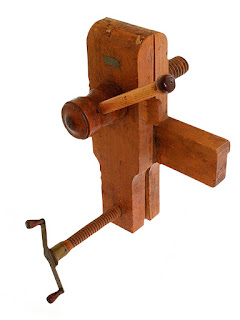 What blew me away with this vice is that it works like a leg-vice, but it is only 20" high. It also appears to have far more control of the squeezing end than a leg-vice, although I bet old Arthur had some seriously banged up knees from that brass crank sticking out like it does, and the fact that the crank is bent up a tad confirms this. My thought is that the crank should come at the front leg from the rear, instead of the other way around. It would give you the same pivot control, but coming from behind it wouldn't be in the way all the time.

I have a hunk of maple sitting here that is perfect for this vice, so it looks like adding another project to the list will result in my finally getting a vice to call my own again. Life is good.

I did some dissecting to the only image I have of it tonight and came up with some basic dimensions, which I have laid out for you below. You are welcome to save that file, if you are interested, or you can download a full sized version (43" x 36") of the same drawing using this link. 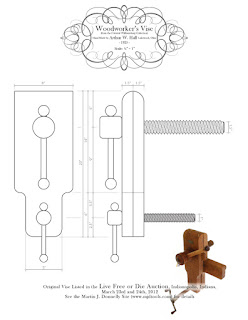