Ok, world, this is how it is done…

Here’s the story behind this story…
Sharpening tools is time consuming and because my time for workin’ wood is limited, I often hold off sharpening a tool that could use a touch-up. The reason for this is that I simply would rather spend the time actually workin’ wood than pushing a chisel across a hunk of sandpaper. I know this isn’t smart, so I started looking at many of the commercial blade sharpening machines available today. Two things struck me about these dedicated machines; a) they are all way too expensive for what they do, and b) the work they can do is limited to the finer points of sharpening on a single horizontal wheel. This is ok for new tools, but it seems like every hundred-year-old tool I have bought, the last one to use it didn’t have a clue about angles, flat backs and micro edges. The result is that the blades often require considerable work before they can be finely tuned.
As I did my research, the Delta Sharpening Centre kept popping up all over the place. As this machine offers up two wheels; one vertical and a fine one on the horizontal, I gave up on the other $300 machines and started researching it. I discovered it was one of Delta’s usual offerings; a sound idea made so cheaply, it crashed and burned.
From all the complaints about the machine that I found, which were too numerous to count, the base machine was fine, as was the vertical wheel. Where the problems developed was balancing the horizontal wheel so the machine wouldn’t vibrate. Downloading all the different machine’s explosive parts drawings that I could find, I soon learned where the problem lies in the Delta machine, or at least I think I did. In fact, I am so confident that there is a way to fix this issue, I started looking for a machine to purchase.
Here’s the problem with the machine…
All of the dedicated horizontal-wheel sharpening machines have a balanced metal plate under their entire sharpening surface; whether that surface is a grinding wheel or proprietary plates or sheets. The Delta 23-710 Sharpening Centre machines do not have this. To keep the costs down, they used something that is more or less an oversize washer that is about 3-inches in diameter. Expecting something this small to balance an 8-inch wheel is more than just wishful thinking; its dumb.
Solution…
Re-jig the wheel mount by adding a full sized, balanced aluminum plate that will fully support the soft, 1000 grit, 8-inch wet wheel.
How to do this was something I couldn't answer until I bought one and had it sitting in front of me.
Enter MJDtools.com…
As Delta no longer makes this machine, I had some problems coming up with a good one in the used market place. One or two came up on eBay, but there was always something that kept me from buying them. The most common reason is my most common irritation with eBay sellers; being that many American sellers won’t ship to Canada. I guess turning away a potential 33-million bidders that could drive up their selling price isn’t worth the added shipping hassles. Grrrrrrrrrrrrr.
I subscribe to Martin J. Donnelly Antique Tools Auction’s newsletters that arrive in my inbox every Tuesday and Thursday. I do so because they list some pretty incredible tools in their auctions, although I have yet to come across anything made by H. E. Mitchell. Damn!
A while ago, a Delta 23-710 was listed in one of those newsletters so I entered a maximum bid of $150. I won the machine for less than that, and with MJDTools.com’s usual professional ways, they charged my Visa for the purchase price plus shipping, and within days the machine was delivered to my door.
Oh, oh…
I didn’t have time to open the box right away but finally, a week later, I went through my unpacking ritual. As I got everything out of the box and laid out on the floor, I discovered that the machine had been shipped with the knife sharpening attachment still attached to the machine. This attachment is a wide adjustable flat that you use to rest a jointer knife on. During shipping, the post office had thrown this heavy box around so much that they snapped the casting. Every time they threw it after that, the resulting large, untethered hunk of metal thrashed around inside the box, taking out the plastic water spray guard and gouging the horizontal wheel.
Given the similar experience I just went through with the infamous Miller Falls tool restorer that will still rename nameless (email me if you want his name), I had some serious concerns about this problem which were further exasperated by discovering that the total cost of the damaged parts was $146.60 plus shipping.
I took a couple of photos and sent off an email to Martin listing the costs of the damaged parts. 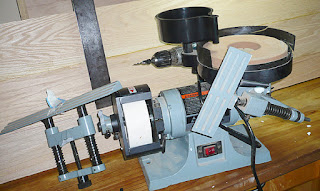 This is the way a pro handles these situations…
Yesterday, I received an email in response to my claim from Kathy at MJDTools.com. In it she stated; “I made a credit on your charge card today for the full amount that you paid”.
I was astounded, astonished, dumbfounded, stupefied and literally blown away. They just didn't reimburse me for the damaged parts. They reimbursed me for the total amount that I paid for the machine plus the shipping. In other words, I got the machine for free, and now I have to just pay for the replacement parts out of the full credit.
In this day and age, who the hell treats their customers so well?
Peace,
Mitchell

A follow-up about trying to replace the broken Delta machine's parts...
The one thing I didn't check before purchasing this machine is the availability of Delta/Porter-Cable parts in Canada, something I usually do before purchasing anything like this, new or used. While this shouldn't be a concern for this type of thing, and I hope my American readers won't be offended by reporting this, but the norm with many of these larger American-run companies is that they want to sell in the Canadian market, and actually buy up smaller Canadian manufacturers to do so, and then leave us hanging for support with the purchases afterwards. Delta/Porter-Cable is one of those companies that fall into this category.

In this case, Delta has an online parts site called ServiceNet. I went on it, found the parts I needed and ordered them. When it came time to pay the bill, their shopping cart form wouldn't accept Canadian addresses. There is no site like this for Canadians and the American site does not even include a Canadian Service Centre location finder.

I sent off an email to Delta which included a screen capture of my Shopping Cart list. I'll keep you posted regarding the results.
Posted by theparttimewoodworker.blogspot.ca at 11:29