Inovation Is The Mother Of Invention...

As I have mentioned, my shop space is in my office, located across a 9-foot-wide room from all my computer machinery. It is a funny thing about all the computers I have owned over the years. I have never owned one that didn't have allergies; all being specifically allergic to dust. With a room full of computers that are prone to sneezing, having a dust-producing woodworking set up in the same room isn't the smartest thing I have ever done, but it exists in this manner as there are only two other alternatives; quit making a living, or quit woodworking. Neither of those options are acceptable to me.
When a dusty job comes up, I have to use a little ingenuity to get it done without wiping out the price of a new car in computer equipment. I have tried covering everything with plastic, but that ate up too much time. I have tried popping over to a friends to do the dirty deed, but I'm not comfortable in other people's environments. Recently, though, I new one came to mind while I was out walking my dog one afternoon.
Out back of our condo building is a catch-basin, one that includes a open-angled wood retaining wall. Walking over, I checked for height, and while it is a tad too high, I figured it might be just the ticket the next time a dirty job came up. It wasn't long after realizing that wall could be useful that a job came up which allowed me to put it to the test.
I am making crown mouldings for my current, never-ending project, which is making my wife a plant shelving unit. As with anything made with hand tools, it takes forever, even though the design is pretty basic. Below is a quick line-drawing of how I am putting the crown moulding together. 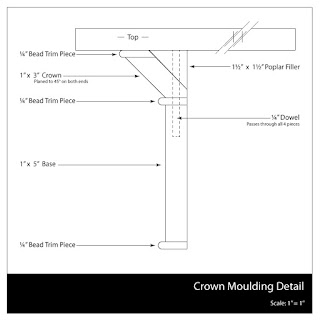 Surprisingly, working with planes produces very little dust, as does scrapping and scratch work. The two big dust-producers are sawing anything and some specific sanding. When I sand finishes, it produces a lot of dust, but it doesn't get airborne, so if I vacuum up the mess regularly, and don't move the pieces being sanded around, the resulting dust is not an issue. Saw the end off a 1 x 2 piece of pine, though, and the dust seems to bred in the air and what I made, plus all its offspring, land on everything everywhere.
The cheapest and quickest way to produce the filler piece needed behind the angled face was to rip a piece of 2" x 2" poplar stock down the middle on the 45, and that, I knew, was going to produce some serious dust.
Of course the best way to handle this would be to grab the stock, saw and sawhorse, and head outside and just do it, but living in a condo doesn't allow you to do things easily. Understand that the one thing condo life doesn't have is space. You trade that off for not having to cut the lawn or shovel the snow. To explain just how tight some condos are when it comes to space, let me relate this little story. My wife and I once invested in some new condos and townhouses that were being built. When the builder asked me how I liked them, I told them they were fine, but anyone who ends up living in them would never be able to go on vacation again. He asked if that was because the mortgage payments would be too high, and I answered, "No. There is no place to store their suitcases once they return home". Hence, until I can come up with a design for a foldable sawhorse that is stable when open, I don't have one.
On the first cool summer's day, one where the temperature dropped below 80°F (27°C), I grabbed the 2 x 2 stock, a 3-foot piece of 1 x 2, my favourite ripsaw, and my latest invention...a portable hold-down, and off I went to cut some wood. Getting to the knee wall, The first thing I did was cut the 1" x 2" stock in half, then I cut a "V" in the centre of each one, as shown in the image below.
Placing those two pieces of 1 x 2 on top of the wall at right angles to the 6 x 6, I then placed the 2 x 2 in the "V's", which held it on the bias. My new portable hold-down is unique, in that it is voice activated, so I tapped the 2 x 2 at a point between the two 1 x 2's and stated, "Hold wood here". Impressively, the hold-down kicked into action and positioned itself at the point I had indicated and held the stock down firmly. It was quite amazing, as you can see for yourself if you click on the thread of the image below.
While I did a great job modifying this piece of equipment, if I do say so myself, if I had to do it again, I would start with the more basic model that doesn't have voice communication. Talking to it to give it directions is fine, but sometimes it gets a glitch in its programming, and it talks back way too much and becomes irritating. While this particular hold-down looks great, I would start with the cheaper model next time as this one is way to pricy for what it does. (and with that, I'm sleeping on the couch for the next month)
As the slope in the land dropped off away from the wall, the stock was way too high to cut with traditional body placement, so invoking the French sawing position that Chis Schwarz reintroduced a while ago, only this time standing up. I positioned myself beside the stock, developed a slightly different hand-hold on the saw that Chris demonstrated, as shown below, and went to town, ripping the 8-foot 2 x 2 in about a half hour, give or take due to having to take the odd break.
The breaks, by the way, were due to the hold-down pad's inability to maintain pressure on the corner of the stock for long periods of time. Frustratingly, it would release itself without warning, and to make matters worse, its voice abilities would kick in. The one thing I wasn't able to figure out is how to add an "off" switch to this unit. When it would let go like this, it would run on wildly and there was nothing I could do but let it run its course and once it exhausted itself, reset it and start again. (add a second month on the couch)
Even though the day was overcast, those breaks did allow me to appreciate the time and effort I spent French Polishing the handle on this saw. Many thanks to Stephen Shephard at the Full Chisel Blog for his instructions as, after viewing the results with the sunlight kicking it up, it put a smile on my face for hours afterwards.
Peace,
Mitchell
Images taken with an iPhone

NOTE: The "Tools of the Trade Show" takes place Sunday, October 2nd at the Pickering Recreation Complex in Pickering, Ontario. While my exposure to vintage tool shows is limited, I have never left this one disappointed as there are always enough items to view and buy to make me happy I made the effort to attend.
If anyone needs any information or help attending this event, just email me and I will be happy to help if I can.
Posted by theparttimewoodworker.blogspot.ca at 14:49