Trying To Be Sharper Than I Appear To Be…

I finally tore apart the Delta Sharpening Centre I bought through Martin J. Donnelly Auctions a few months ago.

In reality, though, I could only find one issue that made the machine junk – its horizontal 1200 grit wet wheel; the reason why everyone bought the machine in the first place. Paying close to $300 for a machine and discovering that it isn’t worth a shit when it comes to the job you bought it for can be a very quick turn-off indeed.

The reason behind this problem is something that plagues many of Delta’s machines. To reduce their production costs, Delta under-engineers some of the most critical parts, resulting in a machine that doesn’t work worth a damn. In this particular case, one of their well-paid engineers miscalculated the weight and centrifugal force an 8-inch wet wheel can produce. That mistake lead to them using only a 2¼-inch collar faced to the arbor that drives the horizontal wet wheel. Because of this, that wheel is difficult to balance, and if you do get it balanced, it is impossible to keep it that way.

While the imbalanced sharpening wheel made it useless as a sharpening machine, I think the bones for a machine designed for that purpose are all there. It turns at 650 rpm, it has the second vertical wheel station that accepts the usual assortment of grinder additions and its motor and casing are beefy and reliable. As a result, I bought it.

So now that I have it, what am I going to do with it? 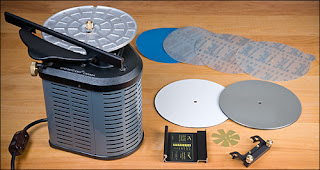 This sharpening machine that is sold by Lee Valley makes the most sense to me, but I find its $400 price tag way out of line for my sharpening requirements. It has an 8-inch turntable that turns at 650 rpm, so it and Delta are the same when it comes to the basics. Where the Veritas machine pulls away and leaves the Delta in the dust is its unique turntable and platter system.

The Veritas machine has an 8-inch well cast aluminum turntable that mounts to a 1¾-inch spindle that is belt driven. The turntable has a collar cast into it that registers it on the spindle and it is fixed in place using two machine screws. This is a pretty well engineered mount, especially when compared to the way Delta attached their wheel support. On this machine the arbor is machined with a face on its side with a matching face on the 2¼-inch collar. The collar just slides over the end of the arbor, the wheel lays on top, and a small, brass 5/8-inch nut buried in the centre of a 2-inch plastic cap holds the lot of it down.

The Delta only has the 1200 grit wet wheel available, although other manufacturers produce wheels of other grits that will fit, but it is a bit of a pain to change them. The Veritas, on the other hand, has seven different grits available in self-sticking discs. These stick to a platter, available in 3mm for the finer grits and a 4mm platter for the heavier grits, with the platters being held down by a small centre-located brass thumbscrew. The result is an assortment of grits that are quick to change.

The Veritas machine has two tool guides, one for honing the primary bevel and the other for lapping the back. The Delta has one tool guide for working both surfaces. My machine will use the Delta system as the base, but instead of riding the tool on it, I’ll mount the tool in the Veritas Mk. II Honing Guide, and ride this guide on the tool guide. This will give me all the advantages of the honing guide that I love with the speed and quick-change ability of the modified Delta.

To make these modifications, I need a single part turned by a machinist; a collar that fits the cup cast into the bottom of the turntable that is bored and threaded to screw down on the Delta’s arbor. I have been in contact with the machinist that rebuilt my old man’s Stanley No.6 that I thought was a 7, but he has yet to reply. If I don’t hear from him by the end of this week, I will put the feelers out for another machinist.

As you can see from the rendering below, it will also require three threaded holes on the top-side; two for the machine screws to fix the turntable to it, and one for the thumbscrew that holds the platters in place. The result uses the Delta collar to support the machined collar, the Delta’s arbor thread to hold the machined collar in place, and the rest of the assembly matches that of the Veritas machine.

Because the Veritas turntable is beefy, well cast and balanced, and because it is only supporting lightweight platters and discs, instead of heavy stones, the wobble should be history and a versatile sharpening centre that also seconds as a grinder and polisher should rise from the Delta disaster.

Now I think that is pretty cool.

NEED A NEW STANLEY PIZZA WHEEL?
On another note, I have found a machine shop here in Toronto that will I can contract with to produce new pizza wheels (roller cutters) for the Stanley Metal Bar Gauges. I believe the same wheel was used on the Stanley No’s 90, 91, 97, 98, 197 and 198. I haven’t finalized the price as yet, but I am assuming they will be offered at somewhere between $12 and $18 Canadian. If you would be interested in purchasing one that is within this price-range, let me know and if there are enough responses, I will finalize the deal.