A Way to Take the "Screw" Out of Purchasing a Vintage "Screwdriver" Online...

First, let me apologize for the title as this post has nothing to do with screwdrivers. It is meant to touch on the topic of protecting yourself when purchasing vintage tools online, so while no screwdrivers are discussed here, the contents could be applied when and if you ever purchase one. Using the term "Screwdriver", however, allowed me, I hope, to be blunt, without being rude.

Collecting vintage tools has become a serious and enjoyable hobby for me. Spending time seeking out and purchasing these tools is a real blast. Paying for those purchases, not so much, but when you finally get them in your greedy little hands, the buzz returns in multiples. The two most enjoyable parts of the equation are the researching of the tool once I find one I want to purchase, and of course, the end result - owning it and being able to use it, or simply just look at it.

When I first started down this collection road, I got truly taken on the purchase of two saws. One was a Disston D-12 that turned out to be so bent, it is better suited for cutting circles than anything else. The other is an Atkins Rip that had been sharpened so many times it looks more like a keyhole saw, than a rip saw. In my defense for these two stupid moves, I will state that they were my first two purchases of vintage tools on eBay. When I made them, I had no idea what I was doing.

While it took getting taken twice, no-one had to hit me across the head with a two-by-four the third time. I swung into research mode, learned to study the images provided in these listings and worked to take the emotions out of these purchases. Since then, I have probably made thirty-odd more purchases, and I am quite satisfied with each one. Some were true deals, some were true steals and some were true must-haves at any price, which I acknowledged before I hit the submit button.

While educating myself to some extent has protected me so far from being taken again, the questionable practices of some sellers on the internet still remain; ready to take advantage of the newbies. One such listing on eBay has the following, short description; "Nice Stanley chisel, no cracked handle here, also a nice tip as well!! Check out my other listings!!!”

Have a look at the image that accompanied this description. It does show that the description is true; it does have a nice handle and the end isn't too bad. It also shows, to me at least, that everything in between is nothing but junk. Do my eyes deceive me, or is this thing seriously bent? It also might have been heated at some time, maybe to try and straighten it out, as there is something seriously wrong going on just above that "nice" tip?

One of the ways you can protect yourself from unscrupulous sellers is to take full advantage of the images they provide. An example of this is how I handled the purchase this week of a Stanley No. 72 Chamfer Plane that I ended up buying for, hopefully, a very reasonable price. The jury is still out on whether I did well with it or not as I am currently awaiting its arrival, but I did do all I could to ensure I would be happy with the deal.

I must acknowledge that this particular purchase is the first one I have made that breaks one of my own rules; “never buy a tool I wouldn’t use”, as I fully expect never to put this tool to wood. My reasoning behind this purchase is purely aesthetic; I fell in love with this tool the moment I first laid eyes on one as I believe it has exceptional proportions and is a very clever design. As a result, I just had to have one. Having watched for one at a reasonable price for quite some time now, I can tell you that discovering one for under their normal price range of $375 to $400 is next to impossible. When this one came up on eBay, the bids were far below what was expected, and to me, this is a huge warning sign. If the collectors on eBay are not willing to open their wallets for a known collectable tool, something is not right with it. The images that the seller provided were adequate, but they were your typical snapshot. They showed signs that the seller was trying to show the tool honestly as he had placed the tool against a plain background and didn’t distort the angles. Because of the exposure, however, seeing a true likeness of the tool wasn’t possible. I grabbed a capture of the image as you can no longer save images off of eBay, with the results of that capture shown below. 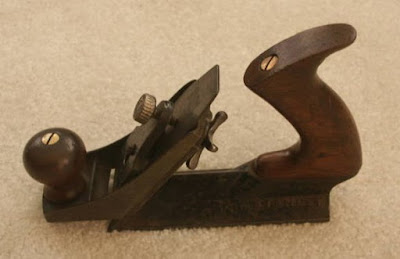 I brought the file into Photoshop and after a little manipulation, I felt I had a good rendition of the plane. For those of you that know Photoshop, I added a Curves Adjustment Layer set using three Control Points and applied an Unsharpen Mask. Comparing the image to a known and trusted one, I fully realized that it wasn't in the pristine condition that true collectors like, as well as it being an example of a later production model, which is probably the reasons why the price was below average. How a good collector sorts the good from the not so good, I have no idea. Do they all know Photoshop like I do? The image below is a result of these manipulations. 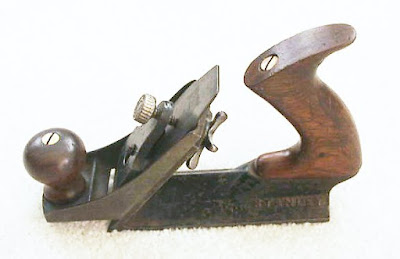 Unlike the seller for the chisel shown above, this seller was more honest in his description, even though his statement that about 85% of the japanning remained might be a little overstated, as the manipulated image showed otherwise. This is probably not intentional, as I suspect that the value he came up with was based on not knowing which parts of this particular plane were originally japanned when it came from the factory as the No. 72 comes with a lot more of that coating than other Stanley planes. The point here, though, is that having done the research and investigated the images offered as best as I could, I had all the information I needed to make a rational choice whether to purchase the plane or not. As I really wanted an example of this one, but knew it would be one that would end up being a dust collector, I placed a value on it which turned out to be enough to be successful. I ended up purchasing the plane for what I consider to be a reasonable price of $250. I feel it was a fair price for a Stanley No. 72 in this condition and one that I feel could be realized if I choose to sell it later on.

Now that I have it, I have to figure out what to do with it. It is not the cleanest tool I have ever purchased, nor the worst, for that matter. I do, however, want to clean it, and this is where conflict rears its ugly head. If you go online and check out the articles regarding cleaning a vintage tool, most will tell you not to touch it, other than a wipe down with mineral spirits or the like. This category of collecting is like any other category; the more it is in original condition, the more it is worth. I have this dilemma with antique furniture as well, and from my perspective, it boils down to what you are willing to live with. I own a beautiful sideboard from the Art Deco period that is made with serious quality and craftsmanship, built from solid mahogany. When I bought it years ago, for a song I might add, it had some stains and markings on its top left by some klutz who owned it before me. I do not care how magical the piece, if it looks like it shouldn’t, I’m not going to live with it, so I stripped and refinished it in a New York minute. Actually, I did this twice as I unknowingly stained it darker than I should have the first time, and realizing my mistake, did it again. Is this sideboard not worth as much now as it could be? Absolutely. Am I happier with it now than I would be if I had left it alone? Absolutely.

Unless someone can convince me otherwise, I have a feeling that the moment I receive this plane, it is going to be dunked in pot of Evapo-Rust that Lee Valley sells just for this purpose.

Mitchell
Posted by theparttimewoodworker.blogspot.ca at 09:05