Meeting Another of Life's Milestones...

Life is full of milestones and I think I hit another one of them this morning. While this post has nothing to do with woodworking, it is about tools. To be specific, it involves the tools shown below being packed up in little boxes, so bare with me as it is an (sniff) emotional moment for me (sniff). 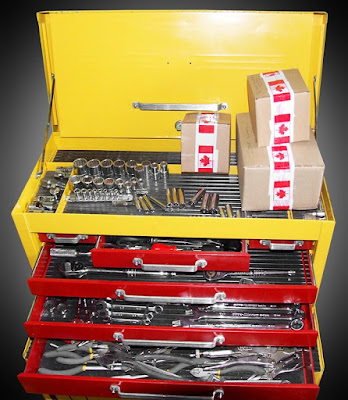 Throughout my life I have been a pretty avid car-nut, a statement collaborated by the fact that my current ride is the 48th car that I have owned. I have had everything from a 56’ Ford; that I shoehorned a Lincoln 430 cu. in. V8 into, to a Jaguar XJ and a BMW 733i, the worst car I ever owned, by the way.

As a kid, buying old junkers for fifty bucks, fixing them up and selling them at a profit was not only a hobby for me, but also a way of putting food in my belly sometimes. I was so prolific at this; I once got a letter from our government informing me that if I bought or sold one more car within that fiscal period, I would be charged with operating a used car dealership without a license. Back then, although I have no idea what the rules are now, you were allowed to buy or sell 12 vehicles over a 12-month period. I had gone through 11 when this letter arrived.

The record for the shortest length of time I owned a car is 23 hours. It was a 56’ Buick Holiday four-door hardtop, one of three GM products that I ever bought. Sorry, I’ve always been a Ford man. That old Buick had all the options, including “Chrome Delete”. Back in those days you could order a car from the dealership in any configuration you could image, including taking things that came as standard fare off of it. The only chrome this one came out of the showroom with was the bumpers, grill, the portholes on the front fenders and badging. I bought it off a farmer who had it sitting in his field for who knew how long, drove it from his place, just outside of the city, to a car wash, where I removed all the evidence of it ever being a chicken coop, and then drove it down the main drag on my way home. I was stopped on that trip and asked if it was for sale. I replied with the affirmative, and the next morning the guy showed up with four times what I paid for it and drove it away. I never even had a chance to have the ownership changed.

The car that I owned the longest was a 72’ MGB. I loved that car and owned it for seven years, three of which had it sitting in my driveway awaiting a rebuild. One day I had to move it so I removed the cover, opened the door and climbed in. My foot didn’t stop until it hit the ground as the floor had rotted away. When I extracted my leg from the hole and stepped back to look at things, I had discovered that not only had I removed a good portion of the floor, but as a result of this, the unibody had jackknifed; the centre of the car being about three inches lower than the front and back. I went inside, heartbroken, and called the wrecker to take it away. This was my second “B”, the previous one being a 67’, and is the only car I ever owned that I miss, even to this very day.

My original plan for that 72’ “B” was to swap out the engine for a little 210 cu. in. Buick V8. This is a pretty common conversion in England as Rover used this engine for years. Up until recently I had it in the back of my mind to buy another and build it, a few years ago changing the engine swap plan from the little V8 to a turbo rotary.

Time, as we all know, has a way of catching up with us. Lifestyles change, ideas change, and often it is our abilities that change. Sometimes these changes are for the better and sometimes for the worse. Often these changes force us to face the fact that some of our dreams will never be met. Two things that came up this summer forced me to realize that my dream MGB will never be built, at least by me.

A few months ago I decided it was time to change the plugs on the car. Due to my eyesight problem, the government will no longer allow me to drive, so the 2007 Ford Fusion that we currently own is technically my wife’s ride, but it is my job to keep it out of trouble. One day I decided to lift the hood and see what I was up against swapping out the plugs. My God. What a nightmare; plugs fitted in the old Hemi configuration, individual coils atop of each one, plug wires that seem to come out of no-where and disappear into the weirdest of places, and an absolutely impossible gap to work in between the back three and the firewall. I closed the hood and walked away defeated.

The second decision-maker arrived just after that in the form of a doctor’s report that I won’t get into. It was nothing serious health-wise, but catastrophic car-building wise.

As a result of these two unconnected events, I decided it was time to turn my mechanics tools over to my son.

I have a kid that any father would be proud of. He is slowly working his way up the chain of command as a chef, employed by one of the major hotel chains. He has been shipped from Toronto to Arizona to Egypt and back again over his short career, and is currently residing and working in British Columbia. His first car build was a 1987 Mazda RX7 and he did some great work on it. Sadly, it was stolen while he was away from home visiting me. He ended up replacing it with a new Scion xT, a car not currently available in Canada. He has taken what was a relatively impressive car in its stock configuration, to one of exceptional performance and beauty. It now sports a turbo charger, headers and a sport exhaust, just to name a few of his modifications. Aw, the things your kids do to make your chest grow proud.

Actually, my son’s love of cars came as a bit of a surprise for me. We had talked cars often, but his conversations leaned towards the exotics; Porsches, Ferraris and the like. As a “there is no replacement for displacement” kind of guy who is more at home on a dragstrip than a raceway, I neither liked nor knew much about exotics, so the conversations didn’t go far. When he approached me about buying a second car, one he could play with, I was surprised. When he ended up buying a newer version of a car I owned when he was a kid, I was shocked.

The day he called me and told me what he had purchased, I hung up the phone and went to my toolbox and had a look at what I had. Taking inventory I realized that everything in the box was the old SAE size, which wouldn’t do him any good on his imports and newer cars. I committed there and then to put together a decent set of tools for him to improve his enjoyment with his new hobby. It seems that my father’s statement that, “You can’t do a proper job without the proper tool”, is being sent along to another generation.

Over the next five or six years I watched the sales, eBay, and other assorted suppliers of mechanic’s tools and purchased the items necessary to fill out the selection. I picked up a Snap-On torque wrench for a song, was able to collect the complete set of sockets in all their drive sizes and configurations, and even was able to scoop some odd-ball items like stubby wrenches, in both metric and SAE, for a fair price. I even went as far as to strip down the old toolboxes to bare metal and repaint them. While I was working away at collecting these tools for him, I used them occasionally, but mainly they sat idle in my office as, with my son’s constant moving every few years, I didn’t think he would want to be bogged down with cabinets this large. I also wasn’t ready to let them go, in all honesty. That MGB was still in the back of my mind. 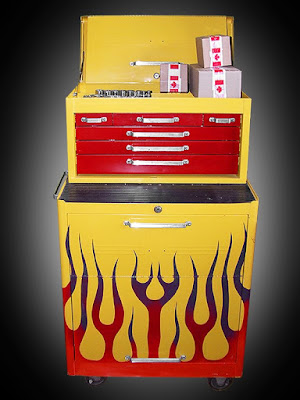 So this summer I woke up to the realizations that there will be no more car builds in my future, my son will probably be moving around often for the foreseeable future, and to own tools is to move them, so now is time to pass on the tools. I know they are going to a good home and my son will treasure and enjoy them, so this has taken a considerable amount of the sting out of giving them up. I do have to admit to getting a bit choked up this morning when I started to pack them up.

I am flying out for a short visit with my son next month, the reason I started to pack them up. If I take them with me, a rather large shipping charge can be avoided as paying for an overweight suitcase is much less than what FedEx has estimated. Most importantly, though, it will allow me to witness his enjoyment as he unpacks them all. When I return, I’ll make arrangements to have the cabinets shipped to him, as it will be a lot more economical without a couple of hundred pounds of tools filling them.

So there you go; another milestone in my life met and recorded for posterity.