All The Gift Giving Days Rolled Into One...

There was a knock on my door yesterday; a sound my wife has come to dread. She has good reason to as it was once again the postman with my latest collection of tool acquisitions. This particular shipment was even more exciting for me because it included not only my latest purchase, but also three other purchases I have made over the past two months.

A couple of months ago I purchased a 14” Disston-Jackson Backsaw on eBay. I came across it while searching for a match to my Jackson 12” dovetail rip. It was one of those strange purchases where you don’t really think about it, you just do it. I placed a bid, if I now remember correctly, one of $27.00, and forgot about it. About four days later I got an email saying I had won the auction and to be honest, I was taken aback by this email, as I truly did not remember bidding on a saw. Finally remembering that I actually did make the bid, I sent off the money and emailed the seller and asked him to ship the saw to Daryl Weir (woodnut4 on eBay), who is located in Illinois, so he could refurbish it before I got my hands on it.

About two weeks after that, I finally came across a new listing on eBay for an open-handled Jackson dovetail saw that I could have made into a crosscut to match the rip I had. I quickly sent off an email to Daryl asking him to look at the listing and make as accurate of judgment on the saw that he could, given the limited information the listing held, and added to by a even more limited answers to my emailed questions I sent off to the seller. Daryl got back to me right away stating that while he couldn’t be sure, the saw did appear in the photos to be workable. I had been searching for this match for the past year and a half and this saw was the first I had come across so I became very determined to own it. It seemed to me to be a long week before the auction finally ended, but I think I ended up paying a whopping $26.00 for it. Again, when I paid the bill, I asked the seller to ship it to Daryl.

A week after that, doing my usual morning cruise through all the vintage tool seller sites looking for more Stanley No. 40 chisels, I came across an older Disston Gent’s saw on the toolexchange.come.au site. While there was very little information about this saw, which is not unusual for this site, I trust the proprietor, so I emailed him and stated that if the saw is straight, bill me and send it to Daryl. Naturally, he billed me $55.00 (AU), and another saw headed off to join Daryl’s ever-increasing workload.

Last Sunday I got an email from Daryl stating that all the work on the saws had been completed and they were being shipped the following morning. Included in the email was the total bill for refurbishing the three saws. I was amazed at how little it cost me, considering the work involved.

The first saw, the Disston – Jackson 14” back, was manufactured between 1910 and 1920. It was not in the best of shape, although the bones were there. Daryl removed the handle and the back. He then cleaned, straightened and re-tensioned the blade, reinstalling the back once the blade was ready for assembly. He cleaned and gave the handle a few coats of boiled linseed oil to preserve the original finish and then reinstalled it. The saw was then jointed and sharpened at 12 ppi. The blade is very thin, at .027”, and as Daryl says, “it is a fast, smooth cutting saw”, one that will work very well in my Stanley No. 150 Miter Box.

The little Jackson Dovetail was in better shape. It only had to be cleaned, jointed and sharpened. As the handle was loose,
Daryl removed it, cleaned it and coated it with boiled linseed oil, reattaching it so it is now tight and secure. For 26 bucks, I didn’t do too badly. While not an exact match to the Jackson I wanted to pair it with, it turned out to be a pretty good little saw. Where my rip is from somewhere around1888, this one is from the1870’s. What was almost disappointing, though, was while my rip is 12”, this one is only 10”. It was in the description. but I had been looking for this match for so long, I didn’t even bother to fully read the description, I just went at it and purchased it. I’ll keep looking for an exact match to the rip, but until then, I’m happier with an almost matching crosscut than I was without one at all.

Here is a shot of my "almost" pair of Jackson Dovetail Saws...

The Disston Gents saw was a steal. The only thing it required was sharpening, and Daryl did that, giving it a crosscut filing. It has seen very little use and has lots of metal beneath the back. The etching on it is faded, but still easily readable. Neither Daryl, Stuart, the seller, or I have any idea when it was manufactured. Daryl put it in the “older model” category because it has the wider back and has a pretty turned handle. I bought it to replace a Dozukime saw I bought at Lee Valley Tools a while ago. Its not that the Dozukime is a bad saw, its not. In fact, it is a very good saw for the price ($49.00 (CAN)). It is just that I can’t get used to cutting on the pull, and I don’t feel I have control of the cut with it as much as I do with a push style of saw. I think using a pull style saw requires a completely different stance than when using a push saw; one that requires you to be further away from the material. With my eyesight, this just doesn’t work for me. I have to be so close to the markings that I could use my nose as a guide to start the saw, so a push style saw is more aligned to my abilities.

I won’t tell you what I ended up paying Daryl for all this work, but when you look at all three saws, it is surprising how very little money I have tied up in them. To date I have purchased four saws from Daryl, had him sharpened two others, and completely refurbish three more. I have nothing but good things to say about this man. Let's face it, I didn’t do anything to get this wonderful set of saws other than pay the bills. While I own them, it was Daryl that made them worth owning. Who, then, should get credit for them; me, because I have a Visa card, or Daryl, who spent a number of hours turning a bunch of sow’s ears into a group of silk purses?

You can get in touch with Daryl Weir at weir@gallatinriver.net, or you can find him on eBay listed as woodnut4. He usually has one of his refurbished saws for sale each week.

Having thought about it, I am considering upping the anti and buying some true collectible saws now; ones I won’t use, but instead, will just dust and look at. I don’t think the vast majority of my tools will increase in value anytime soon, but some of the higher-end collectable saws and planes might as investors look for new places and things to sink their money into. That is what happened with muscle cars from the 60's and 70's, which only happened very recently. Why couldn't the same happen with tools? With the everyday tools like the ones shown here, I think that my son, who will inherit them, will definitely be in a win-win situation. As "quasi-collectables", he can sell them and probably see what I have invested into them back, with maybe a little more to spare. If he decides to keep them, he will have a wonderful set of hand tools to use. Until then, however, just look at what I get to play with.

Along with the package of saws came a second package. Sorry, this post isn’t done yet.

Two weeks ago I was having a look around the eBay listings in the Tool Collectables section, and came across another tool I had been looking for; a Stanley No. 71 Router Plane. It was being offered by nail1nh55, a seller who turned out to be one of the most honest sellers I have ever dealt with on eBay. What he was offering was one of the “B” models, this particular one being manufactured in 1909, the exact tool built in the exact year that I was looking for.

Sound a little too specific? Let me explain.

The open-toe model that Stanley started producing in about 1890 had a "shoe" added that closes the throat so it can be used on narrow stock in about 1895 or '96. They also added a depth rod at about this same time, modifying the shaft that holds the adjustable shoe so it became a dual-purpose item. Around 1898 or 1899, they stopped producing the plane with a japanned finish and started producing it with a nickel-plated finish. In 1902, the biggest change in the design happened when they added the wheel adjustment to move the blade up and down, a design change that allows for finer adjustments with greater accuracy. In 1909, they added the countersunk holes in the sole so a wider board could be attached to the tool and a few months later, Stanley redesigned the sole casting so the combo depth rod / shoe mount protruded through the throat, which eliminated the need for the second collar that held the cutter blade and the shoe attachment together. Stanley went on to produce this design for the next 64 years with only three changes to the design after 1909. One those changes took place in 1910, when they stopped producing the planes with maple knobs and started producing them with ones painted black, another change was the addition of a third "smoothing" blade in 1917 and the third, in 1939, saw them add an adjustable fence to the sole.

The example that I now proudly own has an open toe, a shoe, a combo shoe holder and depth gauge shaft, it is nickel-plated, has the wheel adjustment, countersunk holes in the sole and maple handles, but it does not have the second mount in the throat. This one came with the original and often lost second collar and also has the original two blades. 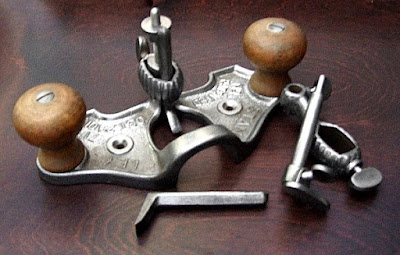 As a result of all of this, and the reason I was looking for this exact model, is that this particular example is one of those very rare Stanley products whose manufacturing date can be narrowed down to within one year – six months, actually. Hence, I can pretty much emphatically state that this Stanley 71 B Router Plane was manufactured in the first half of 1909.

How many tools in your cabinet can you date that closely?

Mitchell
Posted by theparttimewoodworker.blogspot.ca at 13:54