The Worlds Most Popular Chair...

I lifted this from boingboing because I thought it was interesting. 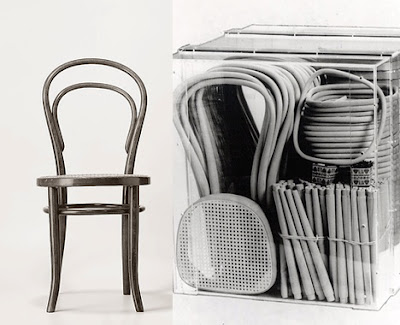 The International Herald Tribune has put up a fantastic write-up of what might possibly be the world's most popular chair: the Thonet Model 14. Six pieces of wood — two circles, two arches, two legs — that screwed together have seated more plump, writhing buttocks than any other chair in history.
The No.14 was the result of years of technical experiments by its inventor, the 19th-century German-born cabinetmaker Michael Thonet. His ambition was characteristically bold. Thonet wanted to produce the first mass-manufactured chair, which would be sold at an affordable price (three florins, slightly less than a bottle of wine). Many of his rivals had tried to make similar chairs, but failed and, at first, Thonet seemed doomed to failure too. When his German workshop was seized by creditors in 1842, he moved his family to Austria and opened a workshop in Vienna, determined to try again.

Eventually Thonet succeeded. When the No.14 was launched in 1859, it was the first piece of furniture to be both attractive and inexpensive enough to appeal to everyone from aristocrats to schoolteachers. By 1930, some 50 million No.14s had been sold, and millions more have been snapped up since then. Brahms sat on one to play his piano, as did Lenin while writing his political tracts, and millions of us have perched comfortably on them in cafés. Another admirer was the modernist pioneer Le Corbusier. "Never was a better and more elegant design and a more precisely crafted and practical item created," he enthused.