I have been messing about with wood on temporary benches for who knows how long now. I have used everything from a few planks spread across a couple of old oil drums to working off of one of those silly "Workmate" things. Since moving out of the condo and into a house a year-and-a-half ago, things have slowly gotten better. My tool cabinet is still with me and continues to sit in my office. It has a nice little worktop that is just the cat's behind when it comes to height and I don't have to travel far to get my hands on the tool I need. This spring, I built a large, heavy bench out of pressure-treated lumber that sits outside on our backyard patio. It is great for doing the slug-work like facing boards and ripping planks, but it does require schlepping the tools I need back and forth. I wouldn't trade that piece of shit for the best Schwarz-built bench he has to offer, though, because that would mean I would have to work inside and that, I'm afraid, ain't for me. For me, this is the perfect set-up. When the weather is nice, I'm out working in the open air and when it isn't, I'm tucked away in my office working on bits and pieces and messin' with things that don't produce much dust or need much room.

I have learned one major lesson while building these fussy, little mounts, though - I need a damned vise. Yesterday I was trying to flatten the face of a piece for the No.10½ plane mount. The stock was about 12" long, 2½" wide, which I can handle with a bit a fussing. What drove me to drink, though, was its thickness. Being ³⁄₈" thick on one side and 1" on the other called for some serious gymnastics to not only get it held down, but held down in such a way as to allow the plane to travel the full length of the stock without hitting anything. What a royal pain in the butt. I got it done, but afterwards I realized that I hadn't enjoyed it one bit, and if I'm not enjoying it, why the hell am I doing it?

Faced with the reality that I needed a vise, I had to figure out what to do about it. Both worktops call for a removable style of vise. There is no sense mounting one permanently on the bench outside as the rain and snow would destroy it in a season and mounting one on the tool cabinet would severely limit its use, not to mention killing a good portion of my work area. If I did go with a removable style, the only type I know of are the metal cast variety, which I'm not fond of from an aesthetic standpoint. I also know the edges of my planes and chisels wouldn't be to happy about working around one either, given what a klutz I am.

What I decided I needed was a small, portable vise made of wood with its main function being facing boards, especially the smaller, oddly-shaped ones that I seem to be involved with so much lately.

This is what I came up with... 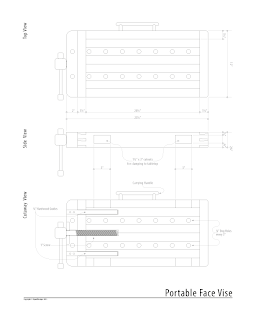 Once I had an idea of what I wanted and how it had to be built, I took a look at the tools I already have. I have a set of old thread cutters, the largest of which is 1", so the single, centre screw is 1" in diameter. My little lathe holds a maximum of 15" stock, so the screw in its entirety, is 14½" long. Because it can't add too much height to the benches it will be attached to, I decided to limit it to 2¾" high. To keep the face square, I added two ¾" maple dowels on either side to help keep it aligned. I settled on an overall size of 25½" by 12" and included two rows of dog holes which should allow it to hold all the weird and wild-shaped pieces of stock I have been coming up with at late. The big question is, what is the easiest way to attach it to the bench? At this point, I plan to just add a couple of cut-outs on either side to accept the heads of regular clamps, but I'll have a look around this weekend to see if there is something less cumbersome about. I have ordered the stock in beech and should be picking it up within a week or two. I'll keep you posted how I make out with it.

In truth, I'm looking forward to getting at it and finally working wood without the added frustrations of not having anything to hold it.

As usual, if anyone has an idea they would like to share with me about this, I'd be truly grateful.