Has It Ever Happened To You...

This situation doesn't happen very often, I'm sure, but I don't think there is a woodworker out there who hasn't had to face it once or twice over the course of being involved with this hobby. Some, like me, face it more often then they would care to admit.

You head out to the shop, or wherever it is you do your woodworking, to put the last finishing touches on your latest project, or part thereof. If it is a difficult one, your chances of meeting up with it are far more likely than with the simple builds. The more hours you spent on it, getting to the point of being near completion, the higher the chances. You walk in and more than the project is waiting for you. You anxiously look at the result of your hours of toil and...wham!


"What the blankety-blank-blank was I thinking?"

There is no other way to describe it; you come face to face with the fact that the job that you spent so long designing and so lovingly creating, actually looks like shit!

I ran into this with the mount for the Stanley No.10½, the one I had pondered about for the last year, the one I spent a few weeks on tweaking the design, the one I spent the better part of almost 7-days building and refining, and the one I posted pictures of for the world to see here on my blog.

The day after I posted those photos I thought I would take an hour or so to finish up shaping it and getting it to the point where I could finish sand it. I walked into my office, looked at it, and actually thought my wife had snuck in during the night and changed it on me. The proportions were out of whack, the slider hung out the end like a mis-placed shirt-tail, and the brackets were silly and incorrectly placed. I couldn't believe I could build such a thing, let alone design it.

My first thought was to modify it, but that wouldn't help the proportions, so I knew coming up with something different was the only way to go. Because this cabinet includes a small work area at the top of its base that will, hopefully, be used often, these tools have to endure a bit of shaking around and stay in the mount when they do. That was the reason for the sliding dovetail lock, but I started to think I may be over-building here. I tried a few experiments and found that it didn't take much of a lean backwards to keep the tool from falling forward. I then calculated that if I keep the tool from moving side to side, a ½" lean over a 2½" base was enough to hold it in place through anything short of a hurricane. I was surprised, given I built the cabinet itself with a ½" forward lean over its 6' height. I did this to counter the weight that the tools add to the back wall of it. With this new information, off I went to make some sawdust.

The mount I decided to make was for my Stanley 72, and this is what I came up with... 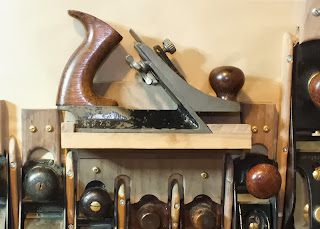 It has only been cut and assembled, and not shaped yet, other than the fillet across the bottom of the shelf to help support it. I'll keep at it and make the two additional pieces as well; one for the beading attachment and one for the bullnose. Once these are done, I'll post a bunch of photos and talk about it a bit more.


I just wanted to get this one image up to show those who thought, "What the #$!@ was he thinking?"

Mitchell
Posted by theparttimewoodworker.blogspot.ca at 18:16