Take every mother-in-law joke you ever heard, the good, the bad and the ugly, and wrap them all up in a 4’ 2” package, throw a piece of ribbon around it and you will have my mother-in-law.

My mother-in-law is one tough cookie. She survived loosing her mother at 6-years of age, being orphaned at 10-years of age, loosing all her brothers, sisters, nieces and nephews, as well as aunts, uncles and cousins after being transported to Auschwitz at 16-years of age in a cattle car, jumping off of trains getting out of Europe after the war to ensure her future sons wouldn’t become part of the Russian Army at 20-years of age and she survived raising my wife for the rest of her life. God bless her for it and I love her to death because of it, but damn, she can become one angry bull when anyone doesn’t do what she wants.

My father-in-law was the family’s forth generation to enter the painting profession, his family’s business doing everything from fresco ceilings to exterior house painting. In Europe, to become a painter back then meant a five-year apprenticeship learning to do everything from making your own paint to graining. Having lost all but one brother and his sister to the camps, his family home and business destroyed, he didn’t argue when his new wife told him she wanted to leave for places yet decided. When he finally hit Canada, he had a second shock; the profession he held near and dear wasn’t respected here the way it was in Europe, something he still doesn’t understand to this day. Past destroyed and pride wounded, he picked up his brushes and rollers and went to work with the rest of the painters. While he never gained the same stature he had at home, he worked himself up the chain and started to earn a fair living for his family.

By their tenth anniversary of arriving in Canada, the old man was making enough money to allow his wife to start decorating…well…everything.

Now I’m not saying she did it single-handedly, but if you ask any of the old fabric hawkers, they will tell you that there was a worldwide shortage of green velvet material back in the mid-1960’s, and it caused quite a commotion. That was the same year my mother-in-law started decorating her home.

In her livingroom sits a couch that, she proudly likes to tell anyone who will listen, is the first king-sized pullout bed ever made. Now a king-sized mattress is roughly 80” square. You then have to have room for the mechanism and then the arms are added outside of that. So while she is proud as punch of that couch, the reality is, the damned thing is 2” shy of 8’. It has to be the biggest couch I have ever seen. As with all manufactured products built prior to the late 70’s, this manufacturer didn’t skimp on the gauge of the steel, so the damn thing is as heavy as it is long, probably weighing in at 250-pounds, if it weighs an ounce.

Added to the 3 ½-square miles of green velvet fabric that covers this thing is a low-back easy chair, a matching love seat and six diningroom chairs, all, you guessed it, covered in green velvet. But it doesn’t stop there.

When I first came on the scene, the walls were covered with embossed wallpaper that reminded me of the doilies that my grandmother had on all the arms and backs of her chairs. If the design wasn’t bad enough, it was done in some sort of short, green fuzz that, to my mother-in-law’s eyes, looked like green velvet. This, of course, using those same eyes, made this paper a perfect match for the furniture. I’ll tell you, I am lucky I suddenly became comatose during that first visit, because if I hadn’t, I would have run screaming from the place and would have never got to marry my wife, who, I will mention, hates anything made of velvet  - in any colour - with a passion – thank bloody God!

Married to a painter, my mother-in-law wasn’t shy about serving him up a busman’s holiday, insisting that he repaint often. The first time around for the “green” rooms, off they went to order more of the same paper. The old girl was dashed when they told her that the paper was no longer in production. My father-in-law, bless his heart, took it on himself to carefully steam the paper from the walls, cleaned all the glue off the back of each piece, rolled each one up and when the painting was done, re-hung it. He did this, not once for her, but twice. The second time he damaged enough paper that there wasn’t enough to do both rooms and hallway, so the hallway got painted an “almost matching” green. He still says the paper was getting brittle with age, but I think the crafty old bugger tore the stuff on purpose because he was tired of looking at it.

The beloved paper might be gone, but the sea of green velvet still exists. When they moved into their new abode she drove me nuts pushing me to try and arrange that furniture in the in the same arrangement that they had been living with for these last forty-three years. Because the layout of the new wasn’t anywhere near the layout of the old, it was impossible to do exactly, but I got it as close as I could.

Now you would think she would be happy, wouldn’t you. Here she is, 70-years older than she ever expected to be, living in a nice condo high over the city, in reasonably good health and surrounded by her furniture and nick-knacks. Nope.

The other day I noticed that her livingroom drapes were closed all the time so I asked her about it. She told me she couldn’t open them. I thought there was something wrong with the rod, so I went to look and found nothing, the drapes moved, as they should, and as I’m a glutton for punishment, I went back to her and reported this. She told me that she could open and close them herself, just fine thank you very much, but she couldn’t open them because then she would see the drapery rod.

Now this took me off guard, seriously off guard. The rod was new, and was an exact match to the old one in the old place. I know this because I had purchased and hung it myself; taking this upon myself because I felt the 40-odd year old one was yellowed and worn. I then honestly thought she was joking, and even chuckled. Oh, boy. Wrong, wrong, wrong, wrong thing to do. Her eyes flashed black and this small, frail, four-foot nothing woman suddenly appeared to tower over me.

Seeing that I had royally pissed her off, I tried logic, asking why, after forty-odd years she suddenly didn’t like the look of the rod. I think you can categorize that as mistake number two. I spent the next ten minutes trying to convince her I didn’t think she was crazy as it was obvious, now that I took a second look at it, that this new rod was completely different than the old. It wasn’t. It was the same style and worked exactly the same way, but I had a much better chance of convincing her that it was my mistake than I did convincing her they were the same. I left shortly afterwards defeated.

For the rest of that afternoon I thought about what I could do for the old bird so she would open her drapes again and get some sunshine in their lives. Whatever it was, it had to be something I could make as, if I did that, I knew all would be forgiven.

I did get an idea, but there was a catch. It involved bending some small pieces of wood.

I had steamed a lot of wood when I replaced the bottom of my boat; so bending wood wasn’t new to me. My problem is that I didn’t have a steam box or a place to use it if I did, so just before dinner than night, I tried something else; something I had read about, but never tried.

I filled my wife’s stockpot almost to the top with water, added a little rock salt and set it on the stove to come to a boil. I went into the office and dug out some scraps of oak; 3/8” by 1 5/8” by 12”. When I had trimmed them equal, I threw them into the pot. I then returned to the office to make a mold.

I let the wood cook for about an hour, pulled them both out, and with my wife doing the deed with the clamps; we clamped them both together around the mold.

Once I had devised a mount that would take my mother-in-law’s abuse, here’s what I came up with… 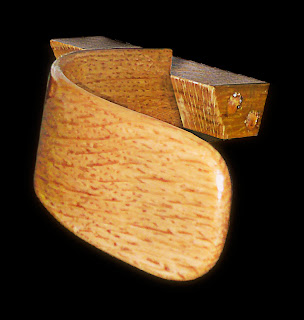 I have them finished with four coats of varnish, ready to install tomorrow. They will mount under the windowsill and will allow the two panels of drapes to be connected in the middle and be “swaged” to each side.

This is how it will mount and work… 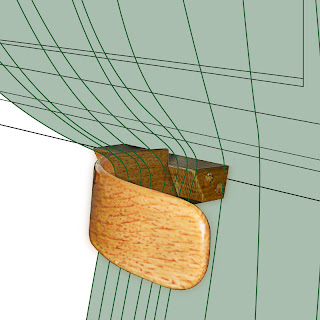 I know this isn’t a faithful reproduction of George Washington’s potty-chair to you guys, but to me, it is huge. If there is one thing I hate more than green velvet, it’s “swaged” anything, especially drapes. After these get installed, every time I walk into that room I’ll have to face those droopy drapes and know that I did it, with protest, but I still swaged those damned drapes.

Awe, well. Its Christmas, and these just might bring a smile, and hopefully a little sunshine, onto the old girl’s face.

And with that, I wish all of you nothing but health, happiness and good fortune throughout this coming new year.

Mitchell
Posted by theparttimewoodworker.blogspot.ca at 03:14