And Who, Exactly, Is Going To Clean Up That Mess...

So this is where I stand with this saw handle this morning... 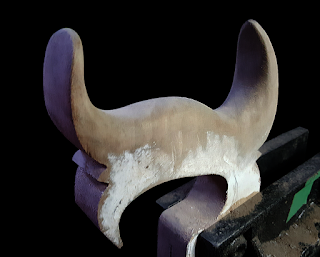 What a blast doing this project. I love it! 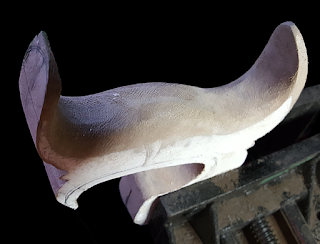 I never really thought one rasp could be much better than another, given the job they were designed to do. All you want it to do is remove material, how complicated is that? Well I guess it is more complicated than I realized because I have never seen a rasp remove as much material as quickly as this Auriou does, and it isn’t even the coarsest grain. If you aren’t up on them, here is a link to Lee Valley’s listing...Auriou Rasps.

I already had a drawer full of rasps before buying this Auriou, but I was never happy with them. They range in age and manufacturer, some originally purchased by my old man, years and years ago. The ones I had purchased were spread over the price spectrum, a result of searching out a decent product. None, neither the ones my dad owned, or the ones I purchased were worth a Tinker’s-dam, in my opinion.

Over the past couple of years I have signed on for some online cabinet maker’s courses, a notable one being the courses offered by Paul Sellers at https://woodworkingmasterclasses.com. That was a fabulous source of information and direction. While he doesn’t have the same type of instructional set-up on the web as Paul does, Christopher Tribe at http://www.christribe.co.uk/ has also been helpful, especially through his instructional videos on YouTube. Both of these gentlemen highly praised the Auriou rasps so I thought I would give one a go. It just took me a couple of years for the need to arise, along with the bullet needed for biting when I finally ordered it.

I will be ordering a couple more at the end of next month. Hopefully, they won’t increase in price before then. 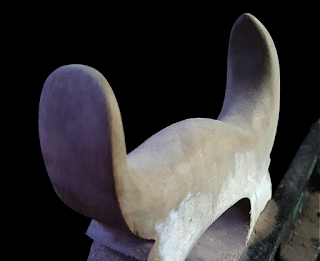 I went at the handle with the rasp and 80 grit sandpaper because I was anxious to see how the design would look and feel. I love the look and the fit is great, the extra ½” I added to the length of the grip being a huge help to the handle’s comfort. The long horns are friggin’ amazing looking as well. I had to force myself to stop because the next step is where the rubber meets the road, and if they don’t connect, it firewood. I’m talking about drilling out for the screw studs...scares the bejeebers out of me.