The Tools of the Trade Show took place today in Pickering, Ontario. This is one of the very, very few vintage tool shows that takes place in Canada, and probably the only one of its size in Ontario.

I arrived late with a wife who was ticked because I had been hocking (Yiddish for pestering) her all morning to hurry up. She slept in, buggered around until 10:30, and wondered why I was a tad upset the entire 20 mile drive to the show's location. It started at 10 and we didn't arrive until almost 11:15. I had visions of viewing nothing but empty tables.

Boy, was I wrong.

The Pickering Recreational Centre, where the show was held, has a huge parking lot and it was filled almost to capacity. Dozens of people were leaving as we arrived, and a fair number were hanging around the entrance, standing in the rain, as we approached. We pulled up with me thinking my chances of finding something I wanted were slim, and that feeling increased as I saw all of this taking place around me. We walked through the doors, paid the 5-bucks a head entrance fee, and hit the event hall.

The hall was full of both people and tables.

The tables held tools and the people didn't.

What the hell was going on here?

I did my first circuit around the room. In general, I wasn't impressed with the quality or type of tools that was being displayed.

I did my second circuit around the room. In general, I wasn't impressed with the price displayed on many of the tools.

I did my third circuit around the room. In general, I wasn't impressed with how the sellers were dealing with the lack of sales.

I did my forth circuit around the room. In general, I was ticked with a lot of the so-called buyers.

The Quality of Tools
For the most part, many of the usual dealers were present and accounted for, although one of the first things I noticed was that MJD Tools was missing this time. While there was the odd quality piece of enticement sitting front and centre of some of the booths, most displayed mainly cheaper, not-so-rare stuff that probably ¾ of those attending already had.

Doug Orr's booth displayed the highest number of quality pieces, a Clifton No. 4 in particular, one of their first offerings, certainly caught my eye. Wider than a Stanley, done in green instead of black and displaying a lot more bling, it is a plane that will shock you when you first pick it up, as it weighs a ton. At $245, it was a good buy for those that wanted an excellent plane or collected original Cliftons. That isn't me, though, so reluctantly, I put it back. I also noticed a couple of amazingly large goose-wing axes laying on his "magic carpet" section, but putting an axe in my hands is just asking for trouble, so I didn't even get close. 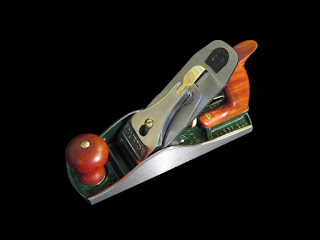 Dave "ToolRush" Carriere's booth was not quite as loaded this time around as last, and overall, the quality of tools wasn't near the last show's level. I did notice something impressive about Dave, though. I can't remember if it was the last show or the one before it, but I do remember asking him if he had any Stanley #50 chisels. He said he didn't have them at that show, and gave me his card. I forgot about giving him a call, but I remembered the minute I saw a "Harlequin" set of #40's sitting front and centre at this event. Good on him. He remembered someone asking and included them.

Sauer & Steiner Toolworks, were absent at this show. I missed them. I didn't miss making a fool out of myself with them like I did at the last show, but I missed their new No. 3 that I was looking forward to seeing in the flesh.

Type of Tools
The group that this show is sponsored through is, The Tool Group of Canada. Because of that, I shouldn't complain that some of the booths mainly displayed vintage tools and machinery from the blacksmith, electrical and plumbing categories, as all of these are encompassed by the group's interests. The first tool I looked at after walking through the doors was a beautiful miniature metal lathe with a sold sticker on it. Damn! All of that said, while the last show had more vintage apple peelers than I could count, in truth, I thought this show included too much of the "other" categories, but I'm biased as I love old woodworking tools. I know those in charge will say I'm nit-picking here, but the show has a name for woodworking tools, has leaned severely in that direction since I started attending it, it is what I go to the show for, so when I see floor space taken up by a mechanically-driven-left-handed-reverse-counter-boring threading machine, when it could display a mother-load of vintage Stanley planes, I get a little disappointed.

Sellers
I heard way too many complaining to their friends that they weren't making any sales. The fact that they were so busy commiserating with each other, they weren't readily available to answer some questions I had for some, meant that their crying in their beer actually cost them a few sales. A few that I was able to lay a few questions on weren't the dealers themselves, but stand-ins, and they couldn't answer them, so again, a few tools I was interested in buying went unsold.

There was one tool that I was really interested in buying; an old, craftsman made leg-vice. The problem with it was that it was the wrong way around. The sliding bar at the bottom was attached to the back leg with the front leg sliding back and forth on it. I believe it should have been the other way around, so that when the vice was closed, a chunk of wood wasn't sticking out across the floor in front of it. I noticed the incorrect set-up right away, and put down my bag and flashlight (its not the brightest lit show and I'm blind, remember) and had a close look at it to be sure I was right about it. I still would have bought it, as reversing it wouldn't be much work, but instead of acknowledging what I was saying, the seller decided to educate me on the finer points of leg-vices. If he had said, "Your right. Let's deal", I would have bought it for 50-bucks instead of the $55 he was asking. The point is, though, he didn't even suggest I might have been right about it, but instead, tried to convince me I was wrong. I think he went home with it.

Buyers
Ok, guys. Listen up. At tool shows, the tools on the table in front of you are for sale. The guy behind the table paid big bucks to be there so he can sell them. He needs as many as possible to see them, pick them up and talk to him about them. That is how he sells them. That is how he feeds his kids. You and your buddy standing front and centre of the table and talking to each other about the last show you were at, or where you got coffee on the way to the show that morning isn't doing the seller a damned bit of good, in fact, your lack of consideration is actually costing him money, not to mention really ticking off those of us who haven't viewed the guy's wares yet, and can't. If you want to talk about something other than buying one of the tools sitting in front of you, move your butts off to one side so someone who might want to buy something - can.

By the way, being a rude bugger and eavesdropping on some of the "table-crowder's" conversations, I got the distinct feeling the majority of them were members of The Tool Group of Canada, who should have known better.

Conclusions
There was a lot going against the sellers at the Fall 2011 Tools of the Trade Show, including the sellers themselves. Mainly, though, it was just the fact that the whole thing is about selling discretionary items in a less than forgiving economy that caused many buyers to leave grumbling and empty handed, myself included. Hopefully, the economy will pick up for the next show in April 2012, and the sellers will be back, wiser and better prepared to deal.

I came home and went online to Jim Bode Tools and bought a couple of miniature wire cutters and pliers. I would have bought more but Jim hasn't completed the 2011 Economics 101 course yet.